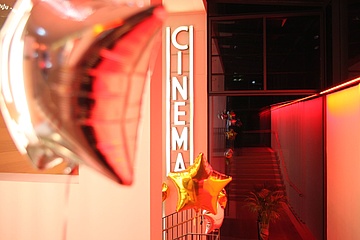 On February 09th it is time again. Then the Academy Awards - better known as OSCAR - will be presented in Los Angeles for the 92nd time. Cinema fans all over the world will be cheering to see whether the favourite "Joker" (11 nominations) will be the big winner of the evening, whether "Parasite" will make OSCAR history or whether Sam Mendes' world war drama "1917" (10 nominations) will be voted Best Film. Or maybe the Netflix film "The Irishman" (also 10 nominations) will make it to the top of the podium?

As every year, the award ceremony will of course be broadcast on television in Germany. If you don't want to enjoy the show alone on your couch at home, you will have the chance to experience Oscar®-Night at the DFF cinema in 2020 again! (Admission 10 pm) From pyjamas to evening dress - this year the Oscar®-night at the DFF is themed "Dresscode: No dress code!" When the glamorous red carpet show begins in Hollywood, the relaxed get-together among like-minded people on the banks of the Museum in Frankfurt is the main focus. And that has a lot more to offer besides the actual award ceremony:

A selection of the nominated short films 2020 promises the first great cinematic moments in short format and gives the starting signal for the race for the golden trophies. Don't forget to submit your film tip!

Is THE IRISHMAN (US 2019) the longest film ever nominated? Joaquin Phoenix could win an Oscar® in the role of Joker - who has been awarded in this role before him? Puzzles are the order of the day at the annual Oscar®-Quiz shortly before midnight in the cinema. Whoever has the right nose here is one of the winners and can look forward to fantastic prizes.

It's worth taking a long breath, because at 2 o'clock the time has come: The winners of this year's Academy Awards® will be chosen and at Schaumainkai the cinema-goers will be there live. The Filmcafé is open all night and offers snacks, drinks, coffee and sweets.

Admission includes the whole programme including welcome drink (without food). Ticket sales begin on Thursday, January 16th with a selection of the nominees for the category "Best Film" in the cinema over the entire Oscar®-weekend. Further nominated films will be shown in the series Kinohighlights 2019.

Friday, 7th, until Sunday, 9th. February: Oscar®-Weekend at the cinema of the DFF

Program not yet confirmed

ONCE UPON A TIME … IN HOLLYWOOD

*For the live broadcast of the award ceremony, admission to the house is free from 2 a.m. (limited seating available). The new Oscar®-night at the DFF is not an official event of the Academy of Motion Picture Arts and Sciences®.