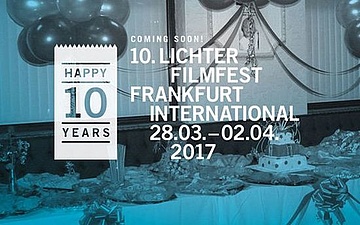 It has now been ten years since the LICHTER Film Festival was brought to life. Ten years in which the team around festival director Gregor Maria Schubert has strived to keep growing the festival and developing the concept. If one considers the quality and status of the festival, then it must be said that this has definitely been successful. And so, in its anniversary year, the festival once again offers many exciting premieres, international as well as regional films, short films, discussions and more. The theme of this year's festival, which is under the patronage of Doris Dörrie, could once again not be more topical. Because in times when we are confronted almost daily with terms like "fake news", the LICHTER FILMFEST FRANKFURT INTERNATIONAL 2017 deals with the concept of "truth". Whether in documentary, short or feature film, the interpretation of what we consider to be "truth" or want to be understood as such is guaranteed to again provide many interesting and exciting moments over the course of the festival.

For its anniversary, two sections have been added to the film festival. The first deals with the future of German film. This will feature five exciting new works that should make it clear that German film is far better, more versatile, bolder and more entertaining than its reputation. This section is to be expanded in the coming years - not only to include more films, but also panel discussions with filmmakers or actors. The second innovation deals with the field of virtual reality, which is still a bit in its infancy. Since this requires the kind of cinematic storytelling to be virtually reinvented, there are not yet many narrative 360-degree films. However, the LICHTER Filmfest wants to show in the Naxos Halle that a collaborative cinema experience is also possible with VR glasses. It's sure to be a very exciting experience.

Of course, there will be some awards given out again this year. <link https: www.frankfurt-tipp.de kino s film _blank>For information on these and other programming, check out our cinema specials HERE.We congratulate the whole LICHTER team to ten great and successful years and wish a lot of success for the next ten editions of the LICHTER FILMFEST FRANKFURT INTERNATIONAL.