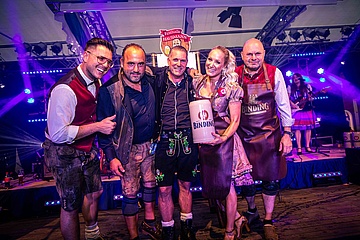 Yesterday, Wednesday, the time had finally come: the 11th Frankfurt Oktoberfest opened with the traditional tapping of the barrel, which this year's Oktoberfest ambassador Janine Kunze handled superbly! In the Festhalle Hausmann at the Commerzbank-Arena everything revolves around Dirndl and Musi, Lederhos' and Leberkäs, schunkel fun and Hessian-Bavarian party mood and conviviality until October 6. In addition to Janine Kunze, who tapped the first barrel of the specially brewed Binding Festbier, Jimmie Wilson and the Weather Girls were also present on the opening night, who together with the traditional Frankfurt Oktoberfest Band gave the 2,500 or so guests in the well-attended marquee a good musical run for their money.

In its eleventh year, the Frankfurt Oktoberfest is still as popular as ever. In the three and a half party weeks 2019, 23 events await the Oktoberfest fans. Some new acts such as Oli P. at the 90s Wiesn and the Malle-Wiesn with the Schlagermafia and Ingo ohne Flamingo will also ensure the good mood this year. Of course, there are also tried and tested mood makers on the marquee stage, for example Roy Hammer and the Pralin&eacute;es, NDW star Markus, Mickie Krause, Peter Wackel and the Trenkwalder. At the five Frühschoppen (Sundays and on the Day of German Unity) there will again be a childcare program, where the kids can have fun with games and fun from 10:30 to 16:00 each time.

Not only on the stage there are novelties for the Oktoberfest fans, also in terms of food and drinks has done again what: In addition to the popular Hessian-Bavarian specialties from Handkäs to Semmelknödel are this year new on the snack and menu, among other things, game goulash on red cabbage (in addition spaetzle and cranberry pears) and cheese spaetzle with onion cap. Also new on tap are a chocolate mint schnapps and a hazelnut liqueur.

"The rush for tickets was huge again this year," reports partner Kai Mann. Because most of the event formats have been tried and tested and popular for years, there are only a few tickets left, for example for the Bergfest with Peter Wackel on September 25 or for the NDW-Tirol-Wiesn with Markus and the Trenkwaldern on September 26.

The entire program as well as tickets for private visitors and corporate parties are available online at www.frankfurter-oktoberfest.de, by calling 069 407662 580 and at all known advance booking offices.