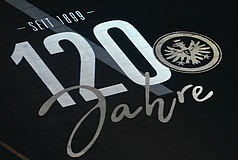 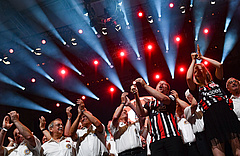 An emotional journey through time

To mark their 120th birthday, Eintracht Frankfurt provided a magical night at the Commerzbank Arena.
Nearly 27,000 spectators witnessed a musical journey through the club's history.
When, at just after 10pm, the audience, dressed predominantly in black and white, sang "Im Herzen von Europa" together, the spirit of 120 years of club history was literally tangible. On a large video screen, the visitors got to see the most emotional moments for over two hours and relived the most striking stages of Eintracht's eventful history - musically accompanied by the hr Symphony Orchestra.

From the founding as the Frankfurt football club Viktoria in the imperial era to the personal and sporting incisions during two world wars, the industrial as well as footballing heyday with the German championship in 1959 as well as the match of the century a year later, the event managed to combine traditions and situations, strokes of fate and successes, grief and joy and send the spectator on a rollercoaster ride of emotions. For minutes and standing ovations, the entire stadium celebrated the 1959 champions in attendance, collectively mourned the stolen championship in 1992 and cheered the cup win from the previous year as well as the European glories of the 2018/19 season. And the infamous rollercoaster decades that earned Eintracht the reputation of the diva, winning the UEFA Cup, the promotions and relegations, the games against Reutlingen and Bordeaux left no eagle eye dry.
Among the guests present were numerous former players, presidents, representatives of the DFB, Frankfurt business and politics.

Firmly part of the city of Frankfurt

"Tonight, the Eintracht family more than duly celebrated itself, this wonderful club and its history. The journey through time over the past 120 years has given us touching goosebump moments for which I am personally very grateful and which I will certainly not forget. Eintracht Frankfurt proved once again tonight why we love this club so much. I am proud of this club and would like to thank all the members, fans and friends of Eintracht who have made this anniversary something very special," said club president Peter Fischer.

Axel Hellmann, Member of the Board of Eintracht Frankfurt Fußball AG, was equally taken with the occasion: "Eintracht Frankfurt has now been an integral part of the city of Frankfurt for 120 years. Everyone who was in the stadium or on the screen today could see and feel that. It was an incredibly emotional journey through time, which also motivates us for the future to continue to represent our stance and the city of Frankfurt as well as the region."

Presentation of the new home jersey

To crown it all, the new home jersey floated down from the stadium roof in oversized form in the "extra time" of the evening, building a fitting bridge to the future and the new season. Black, white, red - these are the colors of Eintracht Frankfurt, in which the new home jersey of the SGE shines for the upcoming season.
Black, white and red vertical stripes adorn the front. The initials "SGE" are placed in the neck area. The Eintracht logo and the "Swoosh" of supplier Nike are in red. The lettering of main sponsor Indeed on the chest is completely white. The logo of Deutsche Börse is placed on the left sleeve. The right sleeve will feature the league logo of the German Football League (DFL) at the start of sales this season. The back flocking of the new home jersey now features an innovative new design and is also completely white. From now on, the team will wear the "Eintracht" logo for Bundesliga home games. For away games, the focus will be on the city: "Frankfurt". Matching the jersey, the pants (with red and white eagle logo) and socks are completely black. 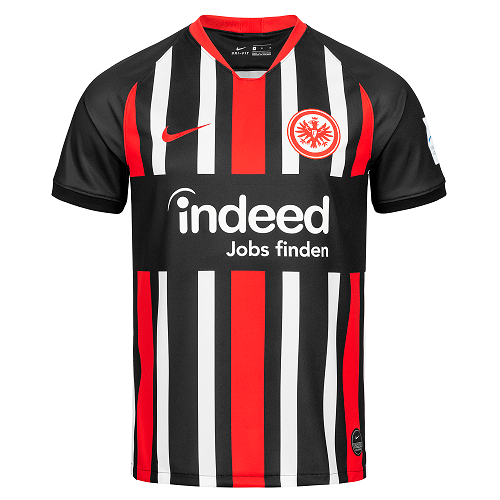 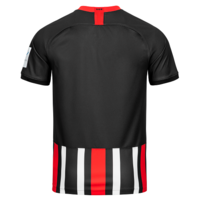