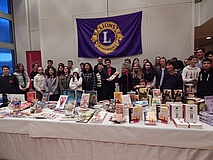 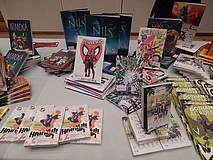 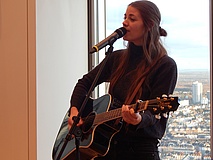 On the 49th floor of the Commerzbank Tower it was festive again on Monday afternoon! Because here the large conclusion celebration of the meanwhile 14th JungenMedienJury was celebrated, with which young people selected the best media from different categories. Since there were somewhat fewer applications this year than in previous years, the number of sections was reduced from five to three. The FILM and AUDIO BOOK categories had to take a break in the fourteenth edition.

In total, forty Frankfurt youths between the ages of 13 and 16 voted for the best YOUTH BOOKS, COMICS & MANGAS as well as the best GAMES from a list of suggestions. The media were financed again this year by the Frankfurt Lions Club and the drug department. At the closing party the young participants presented their results. To take the time to deal intensively with a medium, not only to consume it but also to evaluate it and discuss it with other young people is not a matter of course in times when everything is quickly rated with a "like". The task of the jury members was to critically examine the media they had chosen and to take a position for it, which then had to be defended constructively in the discussions with the other jury members.

The JungeMedienJury, founded fourteen years ago by Hans-Heino Ewers, Professor of Children's and Youth Literature, is a project that takes young people seriously and aims to enable them to develop a certain media competence, learn teamwork and deepen social interactions. In the process, real friendships have also been formed time and again in the past years - another positive side effect of this great action. In the end, the results of the JungenMedienJury should show adults what young people are really interested in, what moves them, what they like and what they like to pass their time with.

Accompanied by the music of Frankfurt-based Singer/songwriter Fee, the individual jury groups presented their winners. For the second time this year, there was again a winner in the GAMES category, which could be included again in 2018 thanks to the support of the drug department. A real enrichment for the project, because after all, games are an extremely important medium for young people and due to the high risk of addiction that they pose, a responsible, competent handling of them is all the more important.

The JungeMedienJury is a commendable project that many young people can get excited about year after year. Let's hope that the commitment of all involved and supporters can be continued and perhaps even expanded in the years to come.

BEST COMIC/MANGA: Gwenpool - The One True Heroine by Christopher Hastings