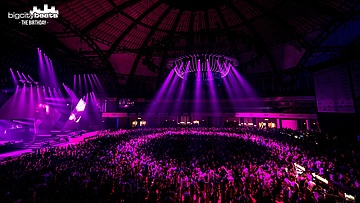 It started as a radio show and is now an internationally recognized brand in electronic music: BigCityBeats turns 15! And you can also congratulate yourself on your birthday - especially when the whole thing is celebrated in the form of a great party. Since the brilliant WORLD CLUB DOME you are used to BigCityBeats. But it can also be smaller. Bernd Breiter (CEO and founder of BigCityBeats) reveals that on Friday evening of April 5, 2019 the B-Day party will not take place in a huge arena. You celebrate in - by BigCityBeats standards - a smaller, but all the finer location: in the Festhalle Frankfurt. The event: part of the Musikmesse-Festival Frankfurt. Congratulations: Timmy Trumpet, All Colors, Le Shuuk and LOVRA.

Sounds good, doesn't it? But before the view of the party a short look back. On 01.03.2004 a radio show saw the light of day: BigCityBeats was born. The first sentences became the motto: “We make your weekend better”. After going on air, smaller parties followed. The first event took place at 8Grad in Heidelberg. Expected number of visitors: 400. Actual number of visitors: 80. ups - the shot probably went backwards. But give up? No Way! More than 1,000 people came to the second party. And today - after 131,400 broadcast hours - BigCityBeats events are visited by 160,000 guests in just one weekend. Tendency? Of course rising. What a success story!

A success story nobody believed in at the beginning. Not even Bernd Breiter himself. „I never dreamed that we would organize events in Korea with a team of only 14 people ... that we would fly into weightlessness in cooperation with the European Space Agency ESA ... that we turn a luxury liner into a party ship and sail across the Mediterranean”, says Bernd Breiter.

The question arises of how to venerably celebrate such a success story, which has been dismissed as a much laughed at vision and an insanely absurd idea. Quite simply: Nothing is better suited for the celebration of the 15th anniversary than a feudal backdrop: the Frankfurter Festhalle - it is the mother of all festival halls, has the certain charm and esprit, the certain extra, the certain something and the certain flair to carry out such an event.

Birthday guests will be: Timmy Trumpet, who comes with his trademark - the trumpet - specially from Australia. An EDM superstar with unforgettable live appearances! The quasi-resident DJ of the BigCityBeats events Le Shuuk is also part of the party. He, who once started as a no-name DJ and today always rocks the main stages of events. Also echo winner All colors is on Stage. The Berliner who has produced groundbreaking earwigs with “Please Tell Rosie”, “Little Hollywood” and “Supergirl”. The fourth name in the Birthday party line-up, Lovra, who is signed to Kontor Records and is one of the absolute hot talents in the newcomer sector, also has the potential to become a supergirl and superstar. 2019 will be her year. Festivals, events, club gigs. From open to close. End: open.

End: open. This does not apply to the BigCityBeats events. Because in 2019 the party nation still has a lot to do. The birthday party is just the door opener of the upcoming big events. It is the official pre-party ... the “Road to WORLD CLUB DOME”, which will take place on 07, 08 and 09 June 2019 as usual in Frankfurt's Commerzbank Arena plus the entire swimming pool area, forest and meadow area. This year, the first Club of Weightlessness is also being built, which celebrated its premiere flight into space in 2018: WCD Zero Gravity. A converted training aircraft - a zero-G flight with parabolic manoeuvres and 50 passengers on board: clubbers and DJs. Zero Gravity, in March 2019: In August, the BigCityBeats WORLD CLUB DOME Cruise Edition will set sail, while in autumn 2019, the BigCityBeats WORLD CLUB DOME Asia will return to what it feels is the other end of the world. And in Düsseldorf, the grand finale or opening for 2020 is on the agenda: the Winter Edition.

But back to the birthday party: Visitors not only get first-class sound and a grand show, but also a very special audiovisual spectacle: the premiere of the “WCD Zero Gravity” aftermovie. And of course Bernd Breiter will not miss the opportunity to enter the stage to personally announce the next “Breaking News”.

The birthday party of BigCityBeats is part of the Musikmesse-Festival Frankfurt - a five-day overall experience with more than 60 concerts and parties in around 30 locations as well as on the Frankfurt exhibition grounds. Tickets for the Musikmesse Festival, which takes place from 02 to 06 April 2019, cost 15 euros. Included therein: Reduced or sometimes even free admission to all events. More info under Www.musikmesse-festival.com