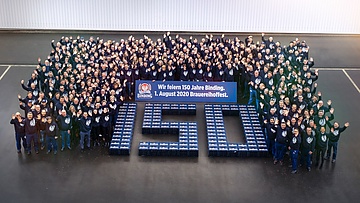 The year 2020 is a very special year for a company in Frankfurt: The traditional Binding Brewery celebrates its 150th birthday. And of course the people of Frankfurt are invited to join in the celebrations. On 1 August 1870, Conrad Binding laid the foundation stone for the Binding brewery with the opening of his brewery on Garküchenplatz in Frankfurt's old town. With entrepreneurial skill, he transformed the company into a flourishing brewery and in 1881 built a modern production facility on the Sachsenhäuser Berg. The Binding Brewery is still at home here today and celebrates its anniversary year with numerous activities and events.

The biggest party will of course take place directly on the birthday, i.e. on August 1, 2020, on the brewery's premises. This is where the big brewery festival takes place on this special day. The Binding Band Contest will also be the focus of the jubilee year. The best artists and bands from Hessen are sought here. The competition is currently in the exciting jury phase. "In our anniversary year, we would like to thank the many friends of the Binding Brewery who appreciate 150 years of tradition and experience of traditional brewing art", says Claudia Geisler, press officer of the Binding Brewery. "We are already looking forward to the many nice actions and hope that we can show many Frankfurters and the people from the region why we are a popular Frankfurt original". </So when the Brewery Yard opens its doors on 1 August 2020 at the Sachsenhäuser Berg for the big anniversary celebration, there will be a toast and an attractive programme with beer tapping, brewery tours, beer tastings and live music. The winners of the Binding Band Contest will also make their big appearance on the binding stage. And, of course, the binding ambassadors Mundstuhl and other Frankfurt originals are also included. So you should mark this day in your calendar. </We serve regional specialities and of course binding beer. All Binding and Frankfurt lovers and customers are invited to join in the celebration of 150 years of Binding brewery. </p>

"It's nice that in this special year with our anniversary logo, we are now unmistakable not only at the two carnival parades in downtown Frankfurt and in Klaa Paris, but in the entire region," says Claudia Geisler. And she adds: "Of course we still have many surprises in store. But since the year is still young, not everything will be revealed at this stage." </The programme for the brewery festival and further information on other anniversary events will soon be available at http://www.binding.de" target="_blank" rel="noopener">www.binding.de and on www.facebook.de/binding. And of course we will keep you up to date with the latest news!