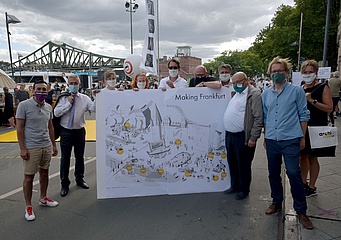 The discussion about the closure of the northern bank of the Main continues shortly before the end of the test phase. At the first action day of MAKING FRANKFURT, the focus was on possibilities and ideas on how things could continue here in the future. All interested citizens were invited. It was about direct exchange, discussion and new ideas. In addition, some actions were presented, such as a parcours between the Historical Museum and the Mainkai Caf&eacute;, which exemplarily showed what could be possible in a transformation of the Main embankment from a traffic to an urban space: Art - Music - Dance - Literature - Play - Market - Pleasure - Environment - Movement - Experiment - Dialogue

At the Speakers' Corner, the initiators of Making Frankfurt were pleased to also be able to ask Lord Mayor Peter Feldmann, Head of Transport Klaus Oesterling and Head of Planning Mike Josef about their visions for Frankfurt.

The Lord Mayor said: "Despite Corona, an almost Mediterranean feeling of life can be seen on our open Main riverbank: it shows what the opening of our Main promenade can make possible. Young and old, culture and regional local suppliers, excursion boats and dance performances. All together on the lifeline of our city, our Main. The banks of the Main - as the day has shown - are far too beautiful to be turned back into a busy motorway. We want a city that is fit for human beings. That is why I appeal to all political forces to respect the majority will of the people of Frankfurt: Let's keep the Mainufer open. Open for playing children, cyclists, culture and a new Frankfurt attitude to life. Let's not undo the first significant step towards a less car-intensive inner city."

Deputy Planning Commissioner Mike Josef added: "The &sbquo;Making Frankfurt' event on Saturday showed what a future Mainufer with more greenery, more seating and smaller events could look like. This offer was very well received. I am committed to further enhancing the quality of life in the city centre and in Sachsenhausen. On the northern bank of the Main, we have the only low quay that has not yet been turned into a park. We must change that. At the same time, we want to transform Berliner Strasse into an urban boulevard. In Sachsenhausen, we will redesign Schweizer Strasse. Here we want to create more space for pedestrians, cyclists, shops and restaurants. In this way, we will create more quality of stay and also support retail and gastronomy in difficult times."

Throughout the afternoon, the diverse actions - from pop-up gardens to participatory activities and dance, music and street soccer - exemplified what can find space and expression and how a vibrant urban space can be created for all.

The day of action's proclaimed bet "Can we manage to bring 50 cargo bikes, each with at least one flower pot, to the banks of the Main at 5 p.m. on Saturday?" was successfully redeemed.

"Making Frankfurt" is an initiative of committed citizens of the city of Frankfurt am Main, open to all who would like to contribute creatively for a permanent closure of the northern bank of the Main for car traffic, for a bicycle and pedestrian friendly city center, for quality of life and quality of stay in our city and innovative and sustainable concepts in urban development and planning.