200 years of Senckenberg
from FFM Aktuell 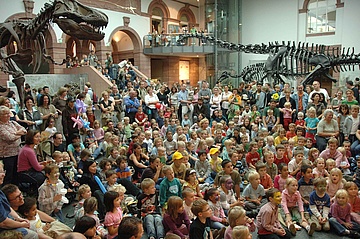 This year, the Senckenberg Nature Research Society (SGN) turns 200 years old. Under the motto "Senckenberg enjoys researching for YOUR life", the Society is celebrating this event with a large programme throughout the year and at all eleven locations in Germany: exhibitions and guided tours, competitions, a science congress, a ceremony and a large citizens' festival on 19 November 2017 at the Senckenberg Natural History Museum in Frankfurt, as well as many other events, are all part of the celebration. In keeping with the motto, the focus here is on Senckenberg research.

"Who is not curious, learns nothing", said Johann Wolfgang von Goethe. It is thanks to the curiosity of 32 scientifically interested citizens of Frankfurt that the Senckenberg Gesellschaft für Naturforschung was founded on 22 November 1817. At the beginning of Senckenberg's history, there was a citizens' society and a small natural history museum in Frankfurt am Main, where the early explorers showed never-before-seen things to an astonished public. Much has happened since then: The curiosity and enthusiasm for nature is now shared by around 800 Senckenbergers at eleven locations throughout Germany. Among them are 300 scientists working on projects all over the world - from the deep sea to the Himalayas, from the Arctic to the Gobi Desert - with one major goal: to understand the Earth system as a whole and to enable a sustainable approach to it. The results are now presented in four museums in Frankfurt am Main, Dresden, Görlitz and Tübingen. More than 7,000 members now support the non-profit society.

"It is great to look back on this remarkable history and to see how the enthusiasm and curiosity of individual citizens and the commitment of many has become one of the largest and most renowned research institutes in Germany," says Senckenberg Director General Prof. Dr. Dr. h. c. Volker Mosbrugger and continues, "We want to thank for this unique civic commitment in the anniversary year and also win new friends and sponsors who will join us in realizing upcoming milestones such as the renovation of the Frankfurt Museum."

The anniversary year kicks off with a glamorous highlight on 28 January: the gala event Senckenberg night is themed "The Blue Planet". The highlight of the annual celebration is the awarding of the Senckenberg Prize in the categories Nature Research and Nature Commitment, which this year go to the scientist and

oceanographer Prof. Dr. Craig Smith from Hawaii and the musician Rea Garvey for his project "Clear Water" in Ecuador. A few remaining tickets can still be purchased at www.senckenbergnight.de . Other highlights of the anniversary include a ceremony in August/September, attended by Hesse's Prime Minister Volker Bouffier and Frankfurt's Lord Mayor Peter Feldmann, among others, and a large family festival at the Senckenberg Naturmuseum Frankfurt on November 19, three days before the Society's founding date.

The study of nature and its conservation is Senckenberg's central concern and is therefore the focus of a large number of events in the anniversary year. Together with its media partner hr-iNFO, Senckenberg is presenting research projects in which citizens can participate by reporting observations, taking measurements or evaluating data. A city talk on the topic of species conservation in Frankfurt is planned with the Frankfurter Rundschau, and the Senckenberg Night of Science on the topic of biodiversity will be broadcast on ZDF in November. Open days at the Senckenberg sites in Görlitz, Tübingen, Müncheberg, Gelnhausen and Dresden as well as popular science lecture series in Frankfurt and Weimar will also provide an insight into research. And at a major international congress in October, researchers will for the first time exchange ideas across disciplines on the topic of geobiodiversity and discuss future research priorities.

In the Senckenberg Naturmuseum Frankfurt, three special exhibitions will accompany the anniversary year. Already on 20 January opens the exhibition "The thin skin of the earth - Our soils", created by soil zoologists at the Senckenberg site in Görlitz. Shrunk to the body size of a beetle, visitors to the exhibition can discover life in the soil from a new perspective. From June, the exhibition

"200 Years of the Senckenberg Nature Research Society" provides an overview of the highlights of Senckenberg's history from a research perspective. In the exhibition "Diversity Creates Life", Senckenberg will open its research collection to the public from 29 September, displaying the impressive diversity of 6,000 objects ranging from tiny beetles, rare plants and extraordinary fossils to an okapi in a showcase 15 metres wide and over four metres high.

As part of the "Culture Meets Nature" series, the choir and orchestra of Goethe University's Collegium Musicum will offer congratulations with two concerts on July 13 at the Westend Campus and on November 2 at the Senckenberg Naturmuseum Frankfurt. In the photo competition "Me and my Senckenberg", Senckenberg fans can submit their most successful snapshot of their best Senckenberg experience on the social networks Instagram and Facebook from 26 June to 16 July with the keyword #MySenckenberg.

To mark the anniversary year, several publications will be released at once: The most important are a chronicle in two volumes with an overview of the highlights of Senckenberg research from the last 25 years as well as reports from the scientific departments, a monograph by the historian Andreas Hansert on the history of the Senckenberg Gesellschaft für Naturforschung during the Nazi era, a book of stories based on selected finds from the Senckenberg archives, and a popular science, colorfully illustrated report on current research from the last two years.