21st Frankfurt Founders' Prize awarded: These are the winners
from FFM Aktuell 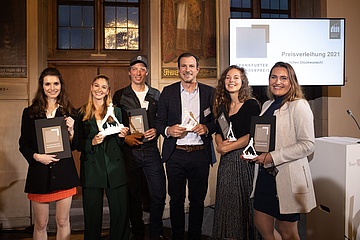 Young companies that not only enrich the economy of our city with new ideas were awarded this year for the now 21st time. The startup talking hands flipbooks was voted 1st place in the Frankfurt Founders' Prize 2021 by a jury of 17. With the innovative idea of teaching sign language through sign flipbooks, the founders Maria Möller and Laura Mohn were able to convince the jury all along the line. With their concept, communication difficulties between hearing children and children with limited hearing can be reduced in a playful way. The first place of the Frankfurt Founders' Prize 2021 comes with prize money of 12,500 euros.

The Frankfurter Brauunion with Sven Weisbrich was awarded second prize and prize money of 10,000 euros. The team is completed with the restaurateur Raffaela Schöbel and the restaurateur Simon Horn, both owners of the Margarete Restaurant. The first Frankfurt beer from the founding team is called FXXXFXXXR Helles and is a beer made by Frankfurters for Frankfurters. The beer is hand-brewed and without additives. The company has also successfully partnered with kiosks, supermarkets, beverage distributors, restaurants and bars.

"We are very proud of this award. On the one hand, because we didn't expect it and on the other hand, because what we are doing and still plan to do in Frankfurt literally finds a broad stage and thus public support. That gives us courage. The entire FRANKFURTER BRAUUNION team is working diligently to create more places and good reasons for all people in Frankfurt to enjoy more time together and thus also to create something new in our city. The Founder's Prize is a great award for this," says co-founder and managing director Sven Weisbrich.

This year, the third prize goes to two founders: the Café Heimelig and the Kitabuli GmbH convinced the jury in the same way, which is why both were awarded prize money of 3750 euros each. The founder Tina Brückmann convinces with her intergenerational gastronomy concept, which integrates young and old. At Café Heimelig, pensioners prepare baked goods and desserts according to their own traditional recipes. Tradition and values are just as important as the conscious use of all foodstuffs as well as the use of high-quality and healthy food. The founder Senada Dzogovic of Kitabuli GmbH impressed the jury with a central daycare software for parent initiatives and independent sponsors. From child and personnel management to automated accounting to reports and evaluations, the software makes everyday work easier and frees up time for work with children. Software trainings or expert conferences on the topic of process optimization in daycare centers complete the spectrum of offers. Kitabuli demonstrates new digital design solutions in daycare operations.

"The Frankfurt Founders' Prize is being awarded for the 21st time this year. The fact that 34 companies have applied for the Frankfurt Founders' Prize this year shows how many great people there are in Frankfurt am Main who enrich our city with their business models and ideas. All the award-winning companies stand for one thing: the quality of the start-up ecosystem in the city of Frankfurt am Main," said City Councillor Markus Frank.

A total of 646 companies have applied with their business ideas since the award was established. The jury showed good intuition in selecting the award winners in the past. "More than 80 percent of the 74 prize winners who have received awards so far are still successful on the market. This shows how sustainable and solid the business ideas of the award winners are," Managing Director Oliver Schwebel is pleased to say.

The recording of the award ceremony is available on the YouTube channel of the Frankfurt Economic Development Corporation and at YouTube verfügbar.