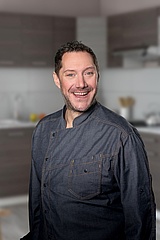 He is a chef and entertainer, book author, media star, entrepreneur and philanthropist. When he stands at the stove, then there is always a whole lot of Hessian cordiality in addition to first-class ingredients. And you can always sense that cooking is his life. In fact, Mirko Reeh never really wanted to do anything else. Even as a child, he was curious to watch his grandmother cook, and when he was fourteen, he was allowed to help out in the kitchen and in service at the romantic hotel "Zum Stern" in his hometown of Bad Hersfeld. Nevertheless, Mirko Reeh first tried his hand as a clerk at the post office. But his luck was not at the post office counter, but in the kitchen. And so, in 1997, he gave up his secure job and went into business for himself. A wise decision, as evidenced by the personal anniversary he can celebrate in 2022: 25 years of Kochentertainment by Mirko Reeh.

And a lot has happened in these 25 years: Mirko Reeh founded his own cooking school in Frankfurt-Bornheim, was awarded the honorary pin of the Association of Chefs of Germany e.V., published various cookbooks and repeatedly stood in front of the camera for Hessischer Rundfunk, but also for other channels such as RTL, SAT.1, Vox or TV Gusto. His craft, which he has taught himself to a large extent, his warm, open nature and his good humor make him so popular with people.

Cooking and communicating - With Mirko Reeh always with fun factor

For Mirko Reeh it is also very important that people learn with him not only something about cooking and good food, but also that they have fun. Because cooking is almost always a communicative event for the man from Frankfurt with the cheeky 'Schnüss'. Whether in front of the screen, at the microphone, during a presentation or in his cooking school - cooking and entertainment simply belong together. What's more, cooking is communicative and gets people talking. This can be experienced live in one of the numerous cooking classes in Mirko Reeh's cooking school in Frankfurt's Wiesenstraße.

The cooking school was always his heart's project. Started as a mobile event at changing locations virtually out of the car, Mirko Reeh's cooking school is now the hub for numerous cooking classes and events. Hardly a week goes by without pots and pans being handled here. In the meantime, everything looks like a professional kitchen. Gone are the days when money was super-scarce and the materials for the furniture were pieced together from the hardware store. The jack-of-all-trades Reeh also ran his own cooking schools on Ibiza and Mallorca. Meanwhile, he concentrates on his home base in Frankfurt Bornheim.

Cooking and helping - Mirko Reeh has a big heart

Not only the big ones love Mirko Reeh. Also the small ones come gladly into its cook school and learn with cooking that healthy nutrition can make genuine fun. Reeh also demonstrated this to the public in his TV cooking show "Quatsch mit Soße," which aired on the children's channel Nickelodeon in 2006 and 2007. But not all children live on the sunny side of life. The "Tour der Hoffnung" (Tour of Hope) for children with cancer was therefore able to rely on the active support of Mirko Reeh. In cooperation with the Hessian Cancer Society, cooking courses were developed for cancer patients, and Mirko conjured up culinary surprises as well as smiles on their faces time and again. "You have to like people and be ready to stand up for them when the sky darkens" says Reeh.

25 years of Kochentertainment by Mirko Reeh - those were years full of successes and defeats, full of changes and developments. One thing is clear: Mirko Reeh will continue to celebrate his love of cooking in the years to come, and will always break new ground in the process. This is also proven by two new projects that proved successful after only a short time: In 2019, Reeh took over his longtime knife supplier "Chroma Messer GmbH" from founder Christian Romanowski, and recently Reeh also became head of the company "Gewürzguru." We are excited about what else is coming and congratulate Mirko Reeh on his personal anniversary! Keep it up!