26th J.P. Morgan Corporate Challenge: 63,870 run for a good cause
from FFM Aktuell 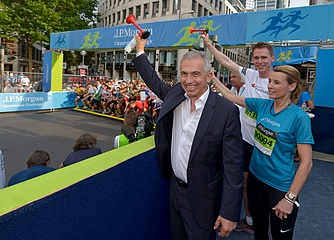 (ffm) After heavy rain in the afternoon, 63,870 runners from 2388 companies and 244 German cities jogged 5.6 kilometers through Frankfurt's city center on Thursday, June 7, in sunshine, pleasant temperatures and a great atmosphere. Together, at eye level, with a lot of fun and just as much sense. Because by taking part, all starters contributed four euros to the promotion of sports projects for young people with disabilities. This year, the participants raised 255,500 euros, and a total of around 2.8 million euros has already been raised for this good cause over the past twelve years. The event is the largest company run in the world.

The starting signal was given by Lord Mayor Peter Feldmann together with Dorothee Blessing, Regional Head of J.P. Morgan, and athletics legend Frank Busemann.

"This run is typical Frankfurt! It is the largest company run and close to the people. It also serves a good purpose. Each runner contributes four euros per person to the promotion of sports projects for young people with disabilities. I am also particularly pleased about the team from the city administration. With around a thousand participants, it makes up the sixth largest team," said the Lord Mayor.

Blessing added: "We are delighted that we have once again been able to persuade so many companies to take part in this unique run, to promote the team spirit and health of those taking part and, at the same time, to once again all do something for a good cause." This objective of the run was also acknowledged by Lars Pickardt, Chairman of the German Disabled Sports Youth. He said "I would like to express my sincere thanks to J.P. Morgan as well as to all runners for the great donation. This gives us the unique opportunity to introduce young people with disabilities to sport, which is so important for them and their development, through projects such as the TalentTage or the Jugend-Länder-Cup."