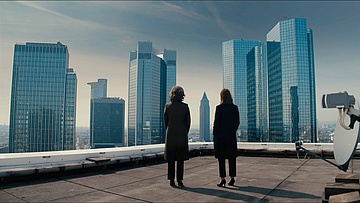 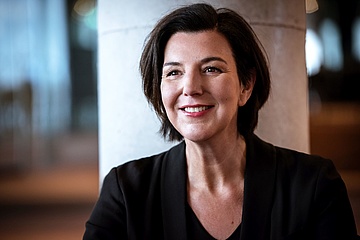 About two years ago, the series "Bad Banks", which was partly filmed in Frankfurt, caused an international sensation. Intelligent, thrilling and involving, the first season delved into the world of finance. A story of power and betrayal, set in the gleaming banking towers of the Main metropolis - that was great television, which will be continued in February with new episodes.

In the first two episodes, which we have already been able to view, investment banker Jana Liekam (Paula Beer) and her team move to Berlin. But nevertheless Frankfurt still plays a central role in the series. The new episodes were directed by Christian Zübert ("Lammbock", "Dreiviertelmond"), who succeeds in providing the story with new impulses - both visually and dramaturgically - while at the same time maintaining the high level of the first season.

The new season is set six months after the financial crisis that erupted at the end of the first season. Tighter regulations are making business extremely troublesome for the merged DEUTSCHE GLOBAL INVEST. The longed-for promotion to the board of directors is becoming a distant prospect for new investment chief Christelle Leblanc (D&eacute;sir&eacute;e Nosbusch). To meet the huge challenge of digitization, GLOBAL is setting up an incubator in Berlin, an "incubator" for young FinTechs to be raised and brought to market with the bank's investment.

Jana is supposed to be the head of a FinTechs that focuses on sustainable financial products. But secretly she's driving her own agenda - after all, she has a score to settle with Leblanc. The dazzling, turbulent capital becomes both an opportunity and a challenge for Jana, not least because an old acquaintance re-enters her life, the charismatic Gabri&euml;l Fenger (Barry Atsma).

Based on the first two hours, it can be argued: Both dramatically and in terms of acting, the second season is on par with the previous episodes. Especially fascinating this time is the visual realization.

Lisa Blumenberg, initiator of "Bad Banks" and producer of the Studio Hamburg subsidiary Letterbox, talked in an interview with the city of Frankfurt about women in the financial industry, ambivalent characters and the location Frankfurt:

Mrs Blumenberg, the second season of "Bad Banks" starts in February. Did you expect the great success of the series with critics and audiences?

LISA BLUMENBERG: In the development of a series, there are of course different phases, also setbacks. But I felt very early on that there could be something special. Almost three years ago we were invited to MIPTV in Cannes as one of ten series from all over the world that were still "works in progress". We had just finished shooting. Presenting the series there at the Grand Palais together with Oliver Kienle, the writer, and Christian Schwochow, the director of the first season, and feeling the enthusiastic reaction of the professional audience, that was the first sign of success.

About the characters: The main character Jana Liekam seems inexperienced at the beginning of the series, but turns out to be ruthless as the action unfolds. What developments will she go through in the coming season?

BLUMENBERG: I don't want to spoil anything, of course! But the point of "Bad Banks" for all the characters is, what happens once you cross a line? How far are you willing to go? At the same time, all the characters, including Jana, have a great ambivalence. She has a great power that can be destructive. But part of her longs to use her power to build something, something that is positive, that points to the future. That longing is even more evident in the second season.

With Jana Liekam and Christelle Leblanc at the center of "Bad Banks," two women are crucial in steering events in a man's world. Why did you decide on a female main character and antagonist?

BLUMENBERG: A young female banker in a classic male domain simply makes for a more interesting story, greater contrasts and greater conflicts. But I may also reveal that the Leblanc character in the first script version was a man. A classic mentor figure, so to speak. But I always wonder: what actually happens when you switch the genders of the characters? Those are often very interesting things with great added value. Jana thus became a kind of alter ego of Christelle Leblanc, a younger version, so to speak. At the same time, in Leblanc you get to know a woman who is very successful but still feels the glass ceiling - even though she has the competence, she can't get past her male colleagues.

The first season is based on events of the financial crisis of 2008. What current events have been incorporated into the plot of the second season?

BLUMENBERG: The events of 2008 inspired the first season - but we especially wanted to tell what it's like ten years after the financial crisis. With all the regulations that were already in place at that point, can a new crisis still emerge? The second season, on the other hand, is not about an event, but about a development: digitalisation in the banking sector. The emergence of the FinTech sector, the young founders who are active in the financial sector, as an alternative or competition to the large traditional banks. With this, we also tell a generational conflict: the old financial world against the new.

Christian Zübert, director of the second season, has said in an interview that the film world functions similarly to the financial industry. How do you see that?

BLUMENBERG: My impulse to tell stories - especially when you get into worlds as foreign as high finance - is always also: What does that actually have to do with us? What drives the people who work there? When you delve deeper, you sense very strongly that it has to do with drives that we all know, that we also know as ambitious people in the film and television world: with recognition, self-worth, competition. The bottom line is that it's not about money, it's about increasing your own value through your work. And that's where people in the film and finance industries are similar.

As you say, the finance industry is very foreign to many people. "Bad Banks," however, doesn't dwell on explaining complex processes and products from that world. Did you ever worry that this might put viewers off?

BLUMENBERG: Our ambition is to portray this world realistically and authentically. That's why the technical dialogue, down to every little formula, is vetted and written by experts. It's like a doctor's show: Doctors throw technical terms at each other. Every professional group has its own language. As a viewer, you perceive it as part of the world shown. You can delve deeper, but you don't necessarily have to understand it. It's always about what happens underneath that surface with the characters.

Frankfurt is the central setting of "Bad Banks". How do you think the look of the series fits the city?

BLUMENBERG: Frankfurt is, after all, Germany's biggest and most important financial showplace. What I love about Frankfurt is that you get a real "Manhattan feel" there. The skyline is simply stunning. The architecture of the city is unique in Germany - and of course that has to do with the financial industry.

On Sunday, February 2, the City of Frankfurt, in cooperation with HessenFilm, will host the premiere of the second season of "Bad Banks" at the Paulskirche. With the main actors and producers in attendance, the first episode will be screened at 5pm. Tickets for the preview are free of charge - those who want to know what happens next for Jana Liekam can pick up their ticket - while stocks last - at the Citizens' Advice Bureau, Hinter den Lämmchen 6. The citizen's advice is open from Monday to Friday from 10 to 18 o'clock.

Order the DVD and Blu-ray HERE