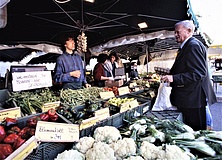 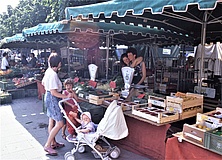 What would Frankfurt be without its weekly markets. Those places where you can strike up a conversation with local producers, chat with vendors, buy fresh fruits and vegetables, or grab a tasty snack on your lunch break. There are several weekly markets throughout the city, some of which have long since achieved cult status for many regular customers. One of these special markets is the Bockenheim weekly market, which celebrates its 30th birthday in May 2018.

Thomas Wolff is one of the traders from the very beginning. His stall was a real standout in Frankfurt, as he was the first to offer organic vegetables. Wolff was there when poultry farmers, farmers and butchers, fruit and vegetable traders gathered at the Bockenheimer Warte at 5 a.m. on 26 May 1988 to set up the 30 or so stalls of the Bockenheimer weekly market for the first time. And Wolff is still doing it today.

"It takes time until everything is unloaded, the umbrellas are in place, the scales and cash registers are running, the bags are hanging and the fruit and vegetables are nicely presented," says Thomas Wolff, explaining the daily routine at the market. "Three hours and a thousand hand movements - at least."

Wolff has known this set-up ritual for three decades now. Since that 26 May, his organic carrots, potatoes, salads, strawberries and more can be found every Thursday at the Bockenheim weekly market. And just like the first time, there are still 30 market vendors selling eggs, bread, honey, poultry, meat products, fruit and vegetables from 8 a.m. to 6 p.m.. Nine of the businesses from the first hour are still there. In addition to Thomas Wolff's stand, there is also that of the Schott family, who offer baked goods made from home-grown organic grain. "Gisela simply came with her bus back then. She wasn't even registered, but then she was allowed to stay," Wolff recalls. "Today her son does the stand."

From the producer directly to the market

What is a matter of course today was rather a novelty thirty years ago. At that time, for example, Wolff and Schott were among the few traders in the market who sold products they had produced themselves. This was also not the case at the existing weekly markets in Höchst, Bornheim and Sachsenhausen. But would this be accepted by the customers?

That's what Wolff was unsure of at first, and so on the morning of the first market day in Bockenheim he had "a tingly feeling". Especially since the offer at his stand was still quite limited. Together with a colleague from the Bioland nursery in the Bad Nauheim district of Steinfurth, he packed the radishes, kohlrabi, lettuces, bunch onions, herbs, strawberries and storage apples grown there onto the table. By contrast, the conventional merchants around it had a full range of fruits and vegetables. "They smiled at us. Not just because of the limited assortment. We had homemade Bioland signs, red-dyed jute blankets draped around our sales tables and no glossy presentation."

But the response from customers was very positive. On the very first day of the market, the two at the organic stand had their hands full and not even time for a break. The customers were very interested in the organic products, tasted and were surprised by the freshness and the full taste. In the end, almost everything was completely sold out. "It was really fun, a good feeling," Wolff recalls. He knew, "Jou, the decision was the right one. People are excited about us. The organic offering is catching on."

It wasn't long before customers started coming in from other parts of town specifically to shop at the organic fruit and vegetable stand. For Wolff, who later founded Bio Frischvermarktung GmbH and the organic delivery service Querbeet, this response was not only the sign that the demand was there, but that Frankfurt actually had huge potential. "We were knocking down open doors. 1986 was Chernobyl. People were sensitized, asked themselves, what can you still eat at all? That was the awakening time for organic vegetables."

Customers were also enthusiastic about the producer stands. Their positive feedback was the initial spark for the weekly market at Konstabler Wache, which was installed by co-initiator Wolff in 1989 exclusively as a producer's market.

The Querbeet founder, who now runs a company with almost 70 employees together with Frank Deltau, still gets up at 3 a.m. twice a week to set up the organic vegetable stall in Bockenheim or at Konstabler Wache. "Market is one of the activities I still enjoy the most. Market is life, you're right up close to the customer. It's important to know what customers want, what they're missing, what they like and don't like."

Many are regular customers. Some, like him, have been coming to Bockenheimer Markt for 30 years. A businesswoman, for example, who used to own a watch shop on Leipziger Straße. The shop no longer exists, but the now elderly lady still comes to the market. "One customer I've known since she was a little girl. She was always there with her mother. Now she comes here with her own two kids." It's stories like this that make us love Frankfurt's weekly markets. And traders like Thomas Wolff give them their very own special character.

But that's just as true the other way around. The Bockenheim weekly market and its customers have grown close to the heart of Wolff, who is a thoroughbred market man: "The people of Bockenheim are grounded, they sometimes go and eat chicken soup at the Remmel stall next door or get a waffle from the next stall. They take their shopping as an experience. And like me, they like the regional vegetables: potatoes, carrots, kohlrabi, the seasonal vegetables and the beautiful, large radishes."