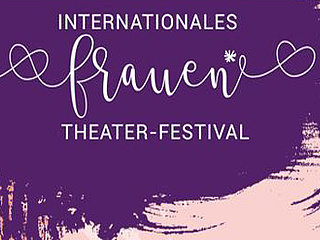 A space for women, girls and artists who create and are interested in culture

(ffm) All good things come in threes: From Thursday, 26., until Sunday, September 29, the International Women's Theatre Festival (IFTF) will take place for the third time on the cultural grounds of the protagon association, Orber Straße 57. Together with the globally active network "The Magdalena Project", protagon is dedicating the four-day festival to the theme of "Collective Empowerment". A variety of workshops, theatre performances, talks and performances are intended to encourage women to exchange ideas on how the dynamics of existing power relations can be changed.

Women and men are unfortunately not equal in cultural and creative professions. Nearly three-quarters of all theaters on German stages are led by artistic directors and staged by directors. "This statistic can only change if we take the space, and create it," says Barbara Luci Carvalho, artistic director of the festival. "That's why with this festival we are creating the space where the situation is different: here women will present their productions and women will direct the plays. In doing so, it is not uncommon to find themes in which they deal with their role in (theatre) life," she explains further.

In addition to the workshops, the festival will feature contemporary and multimedia theatre from different countries, as well as performances, an interactive "gender identity labyrinth" and a symposium on this year's theme. The Mongolian yurt on the grounds as an "under-us-space" offers a special place for conversations and acoustic music. Food, drink and get-togethers will be provided in the evenings at the bar in the theatre foyer with musical accompaniment by DJanes.

Access to the festival site as well as the theatre events, performances and other cultural activities are free of charge. A fee will be charged for the workshops. More information can be found on the festival website https://iftf-frankfurt.com/anmeldung .

The International Women's Theatre Festival is sponsored by the Hessian Ministry of Science and Art, the Women's Department, the Department for Integration and Education, the Cultural Office and the Office for Multicultural Affairs as well as the Autonomous Queer Feminist Gay Department of the Goethe University Frankfurt. The IFTF is supported by antagon theaterAKTion, Stadtmobil and the Escuna Criativa association.