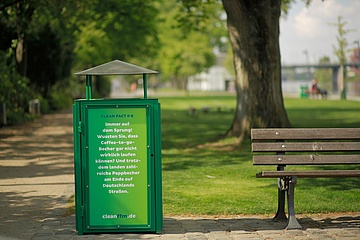 Even if it is hard to imagine with the cold temperatures: Spring is coming! And with rising temperatures, of course, comes an increase in the number of people strolling along the banks of the Main or enjoying the spring sun on one of the many benches. And with many people, of course, comes more rubbish. To prevent it from simply ending up on the meadow or even in the Main, the 40 large rubbish bins have now been woken up from their winter sleep and placed back on the banks of the Main. It is really hard to miss them with their bright green. With their cheeky slogans and emojis, they are back along the Main - for example from the Westhafen to the Hafenpark and on the southern bank of the Main.

To prevent the rubbish bins from overflowing, they will also be emptied more frequently this year by the Parks Department. Instead of three times a week, as in the winter, a cleaning company on behalf of the city will arrive daily from March Monday to Saturday. After particularly warm Saturdays with many party guests on the river, they will even arrive on Sunday morning. This is all part of the major #cleanffm campaign for a clean Frankfurt. In the course of this campaign, the bins were set up for the first time in 2017 on the banks of the Main and in other places where particularly large amounts of rubbish accumulate.

So-called cleanfacts, which are written on the bins, are intended to encourage visitors to think about their own throwaway behaviour, as a kind of food for thought with a wink. They are called, for example, "Unbreakable. A marriage only lasts 15 years on average - plastic bags, on the other hand, last up to 20 years" or "Ready for the island: Did you know that Frankfurt could afford its own Caribbean island from the money the city spends annually on waste disposal?" There are now 30 different slogans, and new ones are in the works. They often deal specifically with Frankfurt and its garbage problems.

If it were up to Bernd Roser, the head of the Green Space Maintenance Department at the Parks Department, one cleanfact should be particularly memorable: "Did you know that with the money Frankfurt spends annually on garbage disposal, 1000 new trees could be planted?" With that amount, Roser said, the city could also completely renovate four water features, or plant thousands of square feet of flowering perennial beds. The Parks Department has to spend "almost a quarter of its green space maintenance budget to clean up trash from our parks. That's really a shame," Roser thinks, adding, "We'd like to be more creative with our financial resources and rather design the city instead of constantly cleaning it up."

The large green trash cans will also greet visitors at Ostpark, Lohrpark and the Schwanheim barbecue area. There will also be stickers in foreign languages there, such as Turkish and Arabic, to appeal to more visitor groups. So, the garbage always nice in the bin - for a clean Frankfurt!