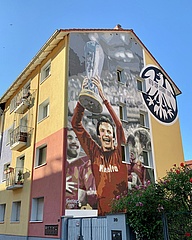 On May 21, one of the greatest triumphs in the history of Eintracht Frankfurt's club celebrated its 40th anniversary. In the return leg of the final against Borussia Mönchengladbach, Fred Schaub, who was substituted by coach Friedel Rausch shortly before the end, scored the Eintracht victory. An unforgettable event not only for the players. The fans also like to think back on this success, which has now been immortalised by a Frankfurt artists' collective on a house wall in Bockenheim. After the Anthony Yeboah House in Niederrad, which sets a strong signal against racism with a huge wall graffiti, and a mural in the Westend in honour of the DFB Cup victory in 2018, now another declaration of love for Eintracht on a Frankfurt house wall.

In the centre of the graffiti, the according to a report of the Hessenschau in 300 working hours with the help of 400 spray cans, Eintracht legend Charly Körbel. On the work of the artists' collective "Frankfurter Farbe", Körbel raises the UEFA Cup into the air - a moment more than worthy of being immortalised in such an impressive way. Apparently, longtime Eintracht captain Charly Körbel himself also sees it that way. He has even refined the graffiti with his signature.

Even if the work could not be officially unveiled on May 21, 2020 as planned due to the restrictions imposed by the Corona pandemic, this certainly does not change the enthusiasm that the large mural arouses among fans. And one thing is certain: The work of the artists' collective will certainly be honoured by countless snapshots that fans will take in front of this house in Werrastraße in the future. And who knows: maybe in the future a few more such impressive wall graffiti will join the already existing works. Not only fans are happy about this - a little bit of colour, if applied in such a way, is also good for the cityscape!