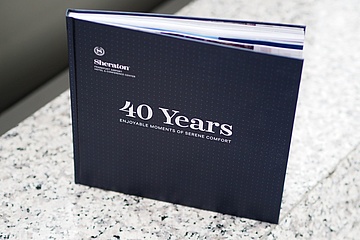 The Sheraton Frankfurt Airport Hotel & Conference Center looks back on an eventful history and celebrated its 40th birthday in 2015. In an entertaining anniversary book, the hotel, which with 1,008 rooms and suites is one of the largest hotels in Germany, now opens up exciting insights - both in front of and behind the scenes. On around 100 pages, historical and current photographs make you marvel, curious stories from the history make you smile, employees report how they found their way to "their Sheraton" and what they particularly appreciate about it. Kitchen director Klaus Böhler - almost an employee from the very beginning - also has his say and reports on the culinary tastes of yesterday and today. "A great book that not only provides a vivid overview of the history of our hotel, its special features and superlatives, but is also simply fun to read," says Ralf Stresing, General Manager at the Sheraton Frankfurt Airport Hotel.

The Sheraton Frankfurt Airport Hotel & Conference Center is one of the largest hotels in Germany and Europe, with 1,008 rooms and suites on nine floors. Its special location between the check-in counters (Terminal 1) of Frankfurt Rhine-Main International Airport, which are only a few minutes' walk away, the AIRrail ICE long-distance train station with "The Squaire" building complex above it and the "New Work City" located within it make it one of the top addresses for stopover overnight stays, international business meetings, conferences and congresses in the economic center of the Rhine-Main area. Direct access to both the A3 and A5 motorways, a bus terminal and regional and suburban railway stations within walking distance complement its perfect accessibility. The Sheraton Frankfurt Airport Hotel has exclusive club floors with a separate lounge, two restaurants, two bars - one of them for smokers -, two fitness areas, an airline crew lounge, a business center, 24-hour concierge service, Europe's largest "Link@Sheraton" work area as well as 60 banquet and conference rooms, the "SkyLoft" - an exclusive event center - and the "Congress Center", designed for up to 1,200 people.200 persons designed "Congress Center".