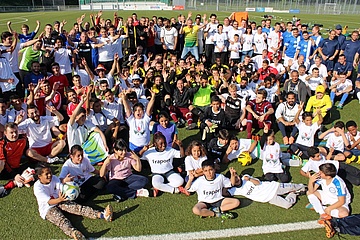 At this football tournament, the focus is not on winning, but on the feeling of togetherness. Integration and togetherness are lived out in sporting terms on this day. Many teams of disadvantaged and non-disadvantaged people play a fair tournament together. For example, teams from Volkswagen Frankfurt, PUMA, Integrative Drogenhilfe e.V., Fußballfreunde Frankfurt (hobby team), Skoda Frankfurt and from the Frankfurter Verband für Alten- und Behindertenhilfe e. V.

Lord Mayor Peter Feldmann has kindly once again taken on the patronage of this important tournament. This year, the 4th Frankfurt Football Integration Tournament is supported by the Local Council 5, VW-Frankfurt and the sporting goods manufacturer PUMA. Already since 2013 the Fleckenbühler organize the integration tournament, in 2015 they were awarded for it - with the district award of the city of Frankfurt.

The Fleckenbühler also provide for the culinary integration. Food and drinks in organic quality will be offered by the Fleckenbühler buffet service. And visitors can win great prizes, such as football jerseys from Bundesliga clubs, in a raffle.

The venue on 12 November is Soccers Point, Hahnstraße 75 in Frankfurt-Niederrad. Kick-off is at 10:00, the end is scheduled for 17:00. The Fleckenbuehler wish all participants and visitors a nice community experience with lots of fair play.

The Fleckenbuehler has been an open, consistently sober community since 1984, welcoming people in any life situation and helping them - drawing on members' past addiction experiences - to live permanently free of addiction through self-reflection, a willingness to learn, honesty, security and work, and to lead self-determined lives in the future.