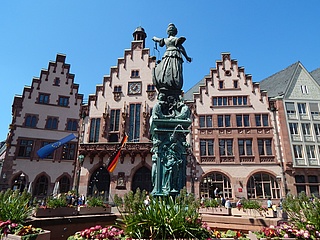 (kus) "On Sunday, September 3, 5000 people informed themselves about living and working conditions in Frankfurt and the surrounding area," Mayor Feldmann was pleased to report.

Many visitors new to Frankfurt and Hesse were pleased to see a wide range of offers from companies, non-profit organisations, state and municipal institutions. The booths showed offers in the cultural, educational, and sports sectors.

"The Newcomers Festival provides information especially about the great diversity in the Rhine-Main region. In this region, you can explore the surrounding countryside, take part in the many cultural and sporting activities or let yourself drift in the green belt," said Lord Mayor Peter Feldmann, welcoming the newcomers to the Römer. "The Rhine-Main region is not only one of the world's most important financial centres, but also boasts the highest density of international schools in Germany," concluded Peter Feldmann.

A total of 60 exhibitors took part in the popular fair. The mostly English-speaking audience was able to watch dance and music performances on stage in addition to the wide range of offerings. The fair closed its doors at 5 p.m.