50,000 visitors at the tenth Bahnhofsviertel night
from FFM Aktuell 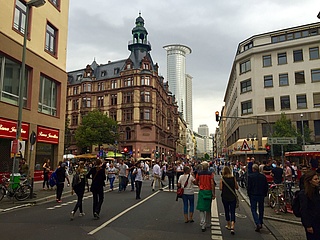 It was nice again: On Thursday, the Bahnhofsviertel night celebrated a small anniversary with its tenth edition. It actually started at 7 pm, but even before that there was an enormous amount of activity in front of some of the evening's hotspots. According to police estimates, a total of around 50,000 people came to the district to visit studios, social institutions, galleries and long-established family-run shops, to sample international specialities, to drift through the district and to celebrate a peaceful festival.

(kus) "With the Bahnhofsviertel night, we show what the quarter is really like: diverse and international, creative and colourful, tough in some places, but always warm, honest and full of life. Nowhere else in the city do such different people come together as between the main station and the Anlagenring," says Lord Mayor Peter Feldmann. "For many Frankfurt residents and people from the surrounding area, the Bahnhofsviertel Night has become a fixed date in the annual calendar. Whether planned or by chance - this is where people meet, where they get into conversation, get to know people and doers. That's what the Bahnhofsviertel is all about - not just during the event, but day after day."

Thomas Feda of Tourismus+Congress GmbH (TCF) is also satisfied with the way the event, which is curated by the Office of Communications and City Marketing of the City of Frankfurt and TCF, went: "People celebrated peacefully. There were no special incidents." Already on the morning of August 17, the access roads to the Bahnhofsviertel were closed for safety reasons, those affected had been informed beforehand to find another place for their vehicles in time. "We had a dozen cars towed away before the event began - significantly fewer than expected," Feda said.

At "Bahnhofsviertel Night. Die Zehnte" visitors had, as always, the opportunity to look behind the scenes of Frankfurt's smallest district. A total of 50 stops were on the program this year, plus guided tours on topics such as stars & starlets, architecture & urban development or languages, cultures & religions - as in previous years, both the TCF and Frankfurt City Events tours were almost fully booked.