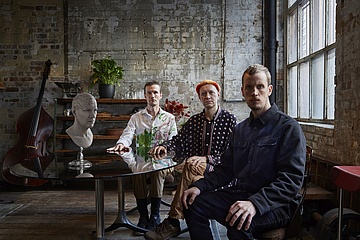 Next week, the renowned German Jazz Festival Frankfurt will take place for the now 51st time. This festival, like so many other cultural events, has to break new ground in order to be able to take place in times of ever-increasing Corona infection. Thus, in 2020, the festival will only take place on two days - and only one concert will take place in front of an audience. On Wednesday, October 28, the hr-Bigband and Django Bates' Belov&egrave;d will play in front of an audience at the Alte Oper Frankfurt. The hr-Bigband has already been playing in front of audiences on and off since September. The hygiene concept for the concerts in the Alte Oper has proven itself over the past two months and has also been confirmed by the Frankfurt Health Department in light of the new developments.

On the second day of the festival, on Saturday, 31. October, SH4aikh 9 extended, Johanna Summer and KUU! will then stream live from the hr radio studio II. These events will then run, like the concert in the Alte Oper by the way, as a live stream on the hr-bigband YouTube channel, on hr-bigband.de, the Facebook page of the hr-bigband, on hr2.de, the Facebook page of hr2-kultur as well as in hr2-kultur and will be available afterwards as video-on-demand.

Info about the artists

Since the 1980s, the exceptional British musician Django Bates has been inspiring and shaking up the European jazz scene. On the occasion of Charlie Parker's 100th birthday, Bates and his trio Belov&egrave;d dedicate the album "Tenacity" to him. For this, they chase the themes of the century musician through the big band turbo in typical idea-spraying manner and give the audience a re-encounter with the genius of the bebop. Together with the hr-Bigband they bring "Tenacity" to the stage.

Behind the name SH4aikh 9 is a nonet around Frankfurt saxophonist, flutist and clarinettist Maximilian Shaikh-Yousef. For this year's German Jazz Festival, the 28-year-old was commissioned to write a completely new programme. For this, he is expanding his nonet to include singer Veronika Morscher to form SH4aikh 9 extended and is working with her on compositions that combine sonorously orchestrated modern jazz with classical singer/songwriter stylistics.

Seldom has a new CD elicited such enthusiastic responses as pianist Johanna Summer's solo record "Schumann Kaleidoscope," released this spring. Her music unfolds an impressive imagery: Schumann motifs and fragments flow seamlessly into free and effervescent improvisations full of dynamics, tension and atmosphere. And in the process, virtuosity and a wonderful touch are just as captivating as the tremendously broad palette of expression.

KUU! that's singer Jelena Kuljić, guitarists Kalle Kalima and Frank Möbus and drummer Christian Lillinger. Their music is fascinating because here outstanding instrumentalists negotiate an independent group sound between jazz and rock. The linchpin of every live concert, however, is the spirited Jelena Kuljić, who not only sings the songs with her powerful and expressive voice, but lives them out and acts them out.