70 years of Hesse - We congratulate
from FFM Aktuell 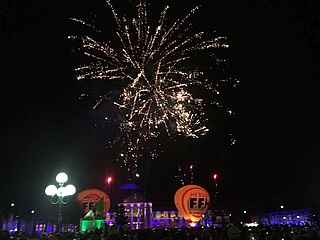 Today the central celebrations for the anniversary 70 years of Hesse took place in Wiesbaden. But also in other places in our beautiful state the anniversary was celebrated today or in the past years. For Frankfurt-Tipp.de a good reason to also say: CONGRATULATIONS, HESSIA!

One of the strongest regions of Europe

In the time after the war, the still young and from many sections newly formed country began to develop its identity. The one million displaced persons and refugees who came to Hesse by 1950 - around a third of the population at that time - played a weighty part in this. As early as 1946, both old and new citizens were able to vote freely for the first time by referendum. The population decided to accept the constitution and thus also to delete the &sbquo;Groß' from &sbquo;Hesse' and to give the state its present name. It went on to become the &sbquo;Pharmacy of the World', a major financial centre and the thriving, geographical hub of the European Union. "Over the seven decades, Hesse has developed into one of the strongest regions in Europe. This is also the result of irrepressible diligence, creativity and a thirst for research, and not least of politically set courses. Despite almost insurmountable challenges, these also always offered the opportunity to further develop the state and in doing so to secure and shape its future viability. The extremely positive development of the past 70 years has clearly shown that Hessen is a state of pioneers who approach and master tasks in new and sometimes unusual ways. Today, Hessen is a proud and strong state and, most importantly, a state in which people enjoy living. And that is why the 70th birthday is not only an occasion to look back in gratitude at the historical developments and challenges, but also an occasion for joy," said the Minister of State.

The President of the Hessian State Parliament Norbert Kartmann recalled that seventy years ago the first of the new Länder created in post-war Germany gave themselves their own constitution, laying the foundations for democracy and the federal structure of the Federal Republic of Germany. "On December 1, 1946, however, not only was the state constitution adopted in a referendum, but the first Hessian state parliament was also elected. For the first time after the war, the people of Hesse were called upon to determine a freely elected parliament. This was the birth of democracy and parliamentarianism in Hesse. We look forward to celebrating this special birthday," said Landtag President Kartmann.

The central celebrations took place under the motto &sbquo;Future needs origin' by the state government on Constitution Day, 1. December, with a church service in Wiesbaden's Marktkirche and a ceremony in Wiesbaden's Staatstheater. The day before, 30 November, began with the award of the Wilhelm Leuschner Medal to the former Bishop of Mainz, Karl Cardinal Lehmann, at Biebrich Palace. Afterwards, the Hessian Parliament convened for a special session entitled "70 Years of Hesse". In the evening there was a big birthday party in the Kurhaus of the state capital. With music and dancing, citizens were able to relive and celebrate the past 70 years in Hesse with its most defining moments. Tickets for the evening event were raffled off by newspapers, radio and television stations. Fireworks in front of the Kurhaus and a festive concert by the Hessian State Theatre rounded off the celebrations.

"Wiesbaden is particularly suitable for the central celebration, as the founding of Hesse was forced and made possible here at numerous historical locations. Celebrating in the places where Hessen's history was written and significantly influenced is the right setting to be able to celebrate the state's birthday together with as many citizens as possible," Wintermeyer said at the Wiesbaden State Theatre.

Further information on the great anniversary can be found on the Internet at
www.70Jahre.Hessen.de