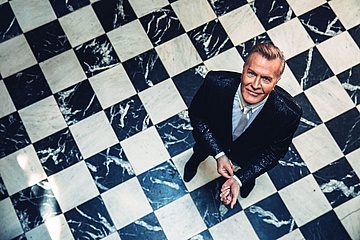 The LOVEBALL goes into the next round on 02 October at the Gesellschaftshaus Palmengarten. This year there will again be a top-class music program. In addition to the Danish pop-folk singer AURA, the 80s cult band "ABC" will also be on stage and will get the guests celebrating with their greatest hits. Songs like "Look of love", "Tears Are Not Enough" or "Poison Arrow", which still fill every dance floor today - and are guaranteed to do so at LOVEBALL. The electropop band also topped the British charts in the 1980s with their later hits such as "When Smokey Sings" and "The Night You Murdered Love". The band's unique, laid-back sound is unmistakable and is sure to bring back a fond memory or two for guests.

The band, led by singer Martin Fry, have been musically active even after their very big chart successes, but have never been much of a live band. Concerts by ABC were more of a rarity, which is why their performance at LOVEBALL will be really special.

The event, the net proceeds of which will be donated to AIDS-Hilfe Frankfurt, will take place for the third time in 2018. Even 33 years after AIDS-Hilfe Frankfurt was founded, its work is far from done. There is still ignorance in society about the deadly viral infection and time does not lessen the challenge, nor the financial burdens. Support, such as through an event like this, is of course more than welcome at any time.

The celebration will take place on 02 October 2018, in the historic ballroom of the Gesellschaftshaus Palmengarten, starting at 19.00. A colorful ball with international and national artists and guests. The LOVEBALL-Frankfurt will not only feature top-class artists and a coherent entertainment programme, the gastronomic offer also promises culinary highlights. Under the direction of banquet chef Steffen Haase, in collaboration with 2-star chef Andreas Krolik, all the chefs of the Tiger & Palm Group await you with dishes created especially for LOVEBALL to enchant you to the max. Accompanying the food offerings will be a variety of matching beverages and fine wines.