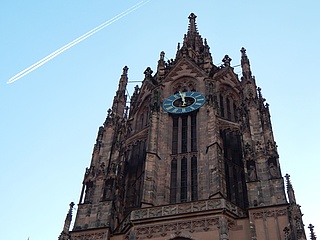 Four times a year - before Easter, Whitsun, Christmas and on the 1st night of Advent - a very special sound resounds through Frankfurt's city centre, which always attracts thousands of visitors especially to the Römerberg: the Great City Ringing. For then the bells of the ten inner city churches ring out, harmoniously coordinated with each other. On Saturday it is again so far, the total of 50 bells ring from 16.30 clock to 17 clock the Easter season. You can find all background information about the city ringing HERE.

"The bells of the downtown churches are very different and each is a work of art in its own right. Together they form a touching and unique sequence of sounds and create a moment of pause. They are an impressive reminder to citizens of the importance of the holiday, in this case the upcoming Easter, the resurrection of Jesus Christ from the dead after his crucifixion, and thus the victory of life over death," says Mayor and Church Commissioner Uwe Becker. "The visit of the Great City Bell is part of a beautiful tradition for many Frankfurt residents before the holidays."

On Easter, the oldest common celebration of Christians, many people celebrate common rituals and traditions. In the Christian Easter, the lamb becomes a symbol of Jesus, who gave his life to free people from the power of sin. In the Jewish Passover, which is considered a precursor to Easter, it commemorates the lambs that were slaughtered before the people of Israel were freed from Egypt. However, our modern Easter has also incorporated many customs that were not originally Christian or Jewish. These include Easter eggs and the Easter Bunny.

"Maintaining rituals and traditions gives a family, but also a society, a sense of we. They make living together easier and connect people. Frankfurt, with 160 congregations of different world religions, as an international and tolerant city, gives all people the opportunity to celebrate their customs and traditions. Unfortunately, this is not possible everywhere in the world. Responsible and respectful interaction with one another promotes peaceful coexistence here in Frankfurt," explains Church District Administrator Uwe Becker. "For this reason, I cordially invite all Frankfurt residents to the Great City Ringing to learn about and cultivate a special Frankfurt tradition."