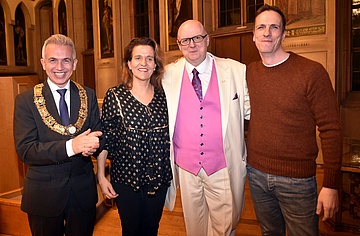 There's no question about it: if the term "Frankfurt original" applies to anyone, it's Thomas Bäppler-Wolf, better known as Bäppi la Belle. Not only does he always put people in a really good mood on stage, but he also knows perfectly how to inspire his audience in very different sectors or how to get involved in the city's events. With his very open manner he sometimes gets into trouble, but the fact that he doesn't mince his words is what has made him so popular for a quarter of a century now. As a dance instructor, he has taught many their first dance steps, has presented (city) history in a special way with almost legendary guided tours through the exhibition TUTANCHAMUN - HIS GRAVE AND TREASURES (which he will also offer again in Mannheim in 2020), through the Historical Museum or the New Frankfurt Old Town and has also been campaigning for the political interests of our city for three years as a city councillor.

Whether as a dance instructor, actor, entertainer, singer, presenter or city guide - Bäppi la Belle simply belongs to Frankfurt like the music to the Handkäs. Especially as the artist always succeeds in reinventing himself and yet always remains true to himself. The successes and commitment of Thomas Bäppler-Wolf were honoured last Saturday by Lord Mayor Peter Feldmann at a reception in the Kaisersaal of Frankfurt's Römer. This appreciation was more than deserved, not only because Bäppi always makes his audience laugh with his shows and his plays - something that is becoming more and more important, especially in today's world. His often very clear words also make him stand out as an artist and a person: "During your guided tours through Frankfurt's new old town, you tell your stories to locals and guests alike, and sometimes you even say where things are stuck. I particularly like this undisguised and honest view of our Frankfurt," said the head of the city, thanking Bäppler-Wolf for his services.

Ina Hartwig, head of the department of culture, was also full of praise for this truly special Frankfurt personality: "Like no other, Thomas Bäppler-Wolf manages the balancing act between the cabaret stage and city politics. With his work he brings guests and locals alike closer to the city of Frankfurt and stands up for its interests with passion and without shying away from conflict. It's hard to imagine Frankfurt's political scene or the city's independent arts scene without him!" True words!

The "heavyweight of our city", as laudator Maja Wolff called the artist, was proud and touched by the honor and the many kind words: "In the past 25 years I have already done a lot for the city in cultural terms. What I do is not high culture, but people like it. So I am very happy that my work is being recognized in this way," said the honoree. His theatre, Theatrallalla, closed in May after 25 years, as the building that housed the venue at 296 Friedberger Landstrasse is being demolished. Since then Bäppi la Belle has been on tour with his Theatrallalla, touring the halls of the city of Frankfurt and the town houses of the region. The beautiful Theatrallalla may be gone - but Bäppi will still be with us - and hopefully for at least another 25 years.

Maja Wolff once again underlined in her laudation what makes Bäppi so unique in her eyes: "The fact that Bäppi is also active in city politics proves how much Frankfurt is close to his heart," said the actress and co-initiator of the "Green Sauce Festival". And she continued: "When he gets involved, he always does so with full vigour. Bäppi is always 100 percent on the job. You can feel that in his work, but also in his private dealings."

Bäppler-Wolf, for his part, confessed that it had already been clear to him during his school days that he belonged on stage. Frankfurt, he said, was an ideal place for him to develop as a member of the independent theater scene. "There is something for every taste here. Due to the many independent theatres, every genre is covered, with no one taking anything away from the other. Nevertheless, the scene must be supported in order to thrive," Bäppler-Wolf appealed to the city of Frankfurt not to reduce its cultural support.

We at Frankfurt-Tipp.de would also like to congratulate Bäppi la Belle on its anniversary and thank it for many wonderful hours of theatre, nice conversations and great collaborations. Keep it up!

Further information about the Theatrallalla can be found at: http://www.theatrallalla.de