A Journey through the History of Pop Music
from FFM Aktuell 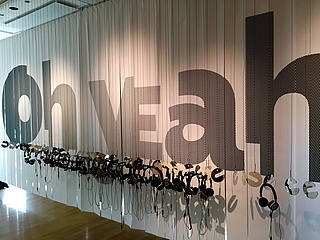 The Museum of Communication devotes its latest exhibition to the history of pop music in Germany. It is an exciting and very diverse story that began as early as the 1920s and produced its first international export with the Comedian Harmonists. The concept of the exhibition was taken from the Museum of Communication in Bern. But apart from the technology and the pithy name, which of course refers to the cult hit "Oh Yeah" by the Swiss duo YELLO, the German version, conceived as a touring exhibition in cooperation with the Focke Museum Bremen, has little in common with the Swiss model. For the mere fact that Germany is much larger than Switzerland has also meant that the history of pop music in Germany is much more extensive and varied than that in our beautiful neighbouring country.

The exhibition, which is divided into several stations, is not only something for the eyes, but also for the ears. That's why you get a headphone in the entrance area of the exhibition, which you can plug in at different listening stations along the exhibition. Here, two presenters guide you through 90 years of German pop music history and turn the whole thing into a three-dimensional radio show. Video clips, golden records, BRAVO covers, costumes, instruments, posters, record covers or original furniture from the legendary Beat Club, the first German TV show for young viewers, make this journey through Germany's pop cultural music history a very diverse, colourful experience.

Accompanied by a total of 90 music tracks as well as 90 radio and film contributions. 140 sometimes very different interpreters, from Marlene Dietrich to the doctors, from Nena to Rammstein or from Elvis to James Last, can be discovered. If you really want to experience the exhibition in its entirety, you really need to plan several hours - or simply come back several times. There's plenty of time for that, because the exhibition "Oh Yeah! Popmusik In Deutschland" can still be seen at the Museum für Kommunikation until February 25, 2018, before it will then travel on to Berlin, Leipzig and Stuttgart. It's a beautifully designed exhibition that brings back many memories, often putting a smile on your face as a result and reviving many a forgotten earworm. If you have a soft spot for pop music in its many facets, you should not miss this multimedia journey through time.