A Musical Theater for Frankfurt?
from FFM Aktuell 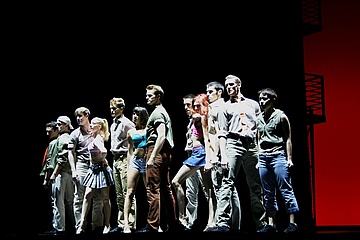 Even if there are no concrete plans yet, musical fans in the Rhine-Main area can still hope: Because the musical specialist Stage Entertainment from Hamburg is apparently very interested in a permanent location in the Main metropolis - an interest that is also shared by the city. After all, a musical theatre can definitely mean added value for the city as a tourist location. Anyone who has ever attended a musical guest performance at the Alte Oper or the English Theatre will know that there would definitely be an audience for it here, so that a musical house would attract not only people from outside, but also many Frankfurt residents.

The decisive factor, of course, is the location. The attempt to establish a regional musical theatre with the Rhein-Main-Theater in Niedernhausen must unfortunately be considered a failure, which is certainly due to the not so easy accessibility of the location. A theatre in the outskirts, on the other hand, well connected to local transport and the city's infrastructure, would be an attractive solution.

In the city center itself, the rents would simply be too high. And since a musical theater is also a risky investment, since not every production is an absolute hit with audiences right away, there's no question about a new building downtown. There are also no existing locations that could simply be converted and thus put to new use. The situation is quite different in the outlying districts - for example in the newly developing Gateway Gardens district at the airport. This young part of Frankfurt was brought up as a possible location by the city itself. And there is indeed a lot to be said for locating a theatre here. For one thing, it would help to revitalize the district, and for another, the (future) transport connections are almost ideal.

However, as I said: Whether it will even come to that, that Frankfurt gets its own musical theater, is far from decided. One should also not forget that there were already plans in the 90s, but then they were scrapped. Nevertheless: Since the interest on the part of STAGE Entertainment is there, musical fans can hope a little bit. In the best case, the curtain could rise for the first time in 2020, but more likely a few years later - for which musical, of course, is still completely uncertain at the moment. We will of course inform you as soon as there is news!