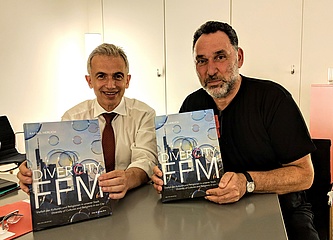 (ffm) The Palestinian Hassan and the Israeli Mody, side by side in the rugby jersey of the SC 1880, two city policemen amidst a group of Asian tourists on the Römerberg, four men - Christians, Muslims and Jews - who work as street angels for the socially vulnerable: They are all Frankfurt. The new book by Frankfurt photographer Rafael Herlich "DiverCity - Diversity of Cultures and Religions in our City" shows them all and many more.

"People from all parts of the world have always enriched our city. Their experiences, skills and cultures stand for an infinite diversity and culture, but also for multi-religious, peaceful and tolerant coexistence. Rafael Herlich has succeeded in taking snapshots - every single one of them tells touching stories," says Lord Mayor Peter Feldmann about the 200-page illustrated book.

Herlich, born in Tel Aviv in 1954, came to Frankfurt as a young man. His images were created over many years as a photographer and through patient observation, they document his love for his city and the people who make it up. They are people like Hassan and Mody and the Street-Angel, the confectioner Gisela Gruber from the Westend, the players of the Frankfurt Eintracht, they are Muslims, Mormons, Hindus, Buddhists, Christians, Sikhs.

"I have been living happily with my family in Frankfurt for many years. During this time I got to know extraordinary people, neither origin nor religion played a role," says Rafael Herlich. "With my pictures I show traditions, diversity, peaceful coexistence, tolerance and civil courage for a better understanding and against racism."

"DiverCity - Diversity of Cultures and Religions in our City" with texts in German and English costs 29.90 euros and is available in bookstores.