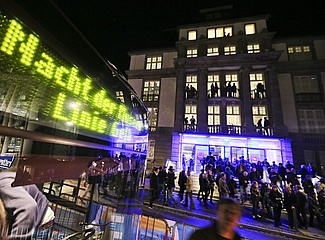 On May 5, night will once again be turned into day in Frankfurt's museums. Then, for the nineteenth time, around 40 museums, numerous galleries and other selected venues in Frankfurt and Offenbach will open their doors for a night full of culture, entertainment and events of a special kind. This is always an experience that attracts thousands of visitors year after year. For only 14 euros, they can then enjoy a colourful programme between 7pm and 2am, with guided tours of the museums' various exhibitions, live music, parties, readings, video performances, dance, workshops and many other interesting offers. Five different shuttle bus lines, historic trams, Call-a-Bike rental bikes (free of charge after registration) or even a shuttle ship will take visitors from venue to venue, and physical well-being will also be catered for everywhere. The Night of Museums will be celebrated not only in Frankfurt's city centre, but also in venues in Offenbach and at the Lufthansa Aviantion Center.

Despite the good connection between the locations and up to 7 hours of time, it will hardly be possible to enjoy all the highlights of this year's Night of the Museums: At the Städel, for example, there is an impressive Rubens exhibition to marvel at, while at the Architekturmuseum the focus is on "boards that mean the world" in terms of urban planning and performance. Next door in the Film Museum, Stanley Kubrick's visionary Space Odyssey is making its debut. At the Museum Angewandte Kunst, visitors walk live along a catwalk to music by Robert Johnson DJs Ata Macias & Aziesch - beyond that, alongside the much-acclaimed "Jil Sander. Presence" exhibition, EY's "Young Art" charity auction with works by young artists from Frankfurt's Städelschule and Offenbach's Hochschule für Gestaltung will also attract visitors. The Schirn Kunsthalle dedicates a major special exhibition to the exceptional US artist Basquiat. For the first time, the CineStar-Metropolis is participating in the night with a hall - this is where this year's Oscar®-nominated animated short films will be shown.

Art everywhere - from Frankfurt to Offenbach

There is also plenty of art to discover outside the city centre: In the crime museum, the red-hot topic "VIOLENT love" is the focus of the night, and in the money museum, not only many a bill is conjured up. After a long break, the observatory will once again offer a view of the Milky Way, and the space exhibition will give fans of space travel, both young and old, a run for their money. The Lufthansa Aviation Center, which is participating for the first time, will also be devoting an exhibition to its blue and yellow crane signet.

Whether it's Ottifanten at the Caricatura Museum, urban art by 12 artists at Off-Space Ost>Stern or college rock and LED live performance at the Museum für Kommunikation - this night stretches through large parts of Frankfurt all the way to Offenbach. There, the City Tower takes you high up to the 30th floor for art enjoyment with a panoramic view, and the Leather Museum offers an evening for "couples": the giant memory game invites you to discover pairs of objects, and you can dance together at the Tango Argentino.

Discovering new things and helping to shape them

During numerous guided tours, you can learn exciting facts about the respective exhibitions of the museums, including the works of the South African artist William Kentridge at the Liebieghaus. At a musical reading by the well-known Scandinavian crime novelist Jan Costin Wagner at the Haus am Dom, visitors' criminal instincts are called upon. The Historisches Museum puts the spotlight on Frankfurt between "Once?" and "Now!" and the voice actors of Ben Stiller and George Clooney take on the challenge of reading what the audience brings them.

There's Music in This Night - Sounds from Around the World

Musically, the night serves up just about every genre, with French chansons at the Struwwelpeter Museum, Persian folklore at the Goethe House, and Russian piano music at the Icon Museum. In addition, saxophone sounds can be heard by candlelight at the Dommuseum, and night owls will get their money's worth at the Crown Pop-up Club at the Schirn, among other places.

The Night of the Museums ticket costs 14 euros (VVK and box office) and is available at all participating locations and AD ticket/reservix VVK outlets nationwide. It includes admission to all participating venues and is also a ticket for the nightly shuttle buses, the historic tram and the shuttle boat that runs between the Städel and the Eisernem Steg. For the first time, there will be a bike sharing offer at night: from 7 p.m. to 2 a.m., Call a Bike bikes can be used free of charge. Registration (from 3 euros/year) as well as station overview is available on the website: <link https: www.callabike-interaktiv.de _blank>

The family ticket is available for 29 euros (VVK and box office); this is valid for two adults and own children/grandchildren under 18 years. Furthermore, there is a reduced admission ticket for 9 euros (VVK and box office; only valid together with photo proof) for children under 18 years, pupils, students (except students of the university of the 3rd age U3L), federal volunteers, unemployed, severely disabled (with reduction of earning capacity from 50 GdB, further information: nacht-der-museen.de) and Frankfurt-Pass/Kulturpass holders. Admission is free for holders of the MuseumsuferCard. It is available at selected museums during the night and costs 85 euros per year.