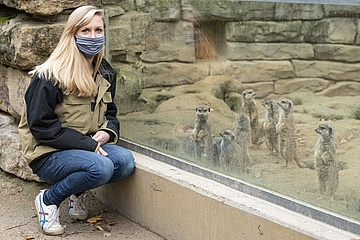 (ffm) "Plop, plop," it goes in the penguin pool - who's coming? Some of the Humboldt penguins jump hastily into the water, the others stretch their heads up curiously. The public favourites of Frankfurt Zoo don't have many visitors these days. That's why they are immediately on the spot when curator Sabrina Linn approaches the pool. Then all the penguins jump into the pool and swim a lap, paddle in the water and make trumpet-like sounds. The zoo's second corona-related closure isn't leaving the animals and zoo staff unscathed, either.

The zoo had already worked out a carefully thought-out operational concept for its employees for the first lockdown - first and foremost is the optimal care of the animals. "We are currently focusing on the essential work, which is to make sure the animals get their needed care, food, and if necessary, medical care," says Sabrina Linn. The zoo's animal keepers are responsible for eight precincts. Currently, as in the spring, they are divided into two teams. Contact between the teams is strictly prohibited. "We work with minimal staffing. If a keeper, in one team is infected, the other team is still fully operational and can continue working," she explains. This requires a lot of communication among each other - handovers and important messages are only passed on by phone or email. This not only demands a lot from the zoo staff professionally, but also personally: friendly caregivers who aren't on the same team aren't allowed to meet. "We also have partnerships or families among the staff, so we took that into account when we put the teams together, but friendships now have to endure the distance," says Linn, who is in constant contact with the keepers from all the teams and knows the situation. All are very disciplined, she said.

Some animals lack interaction with visitors

The animals don't have to be disciplined and keep their distance. The meerkats scurry around in their indoor enclosure - as soon as Sabrina Linn approaches the enclosure, they stand on their hind legs and look curiously through the glass. Just a glance is not enough, like little arrows they dart through their little flap into the outside enclosure and look expectantly at the curator. The 32-year-old chats a little with the zoo's crowd pleasers. Then breakfast arrives. A keeper climbs into the enclosure and serves the meal. The menu includes boiled eggs, fruit and vegetables. As with the penguins, the meerkats are among the animals that love and perhaps "miss" interaction with humans. Linn explains that while this should not be anthropomorphized, the staff still found that animals such as meerkats, fur seals, penguins and great apes very much enjoy the attention of visitors, and the animals now lack that stimulation. "People are an essential part of the environmental stimuli. When they're away for a long time, a visitor is a fresh stimulus for them." This deficit is now filled by the animal keepers - in addition to the essential tasks, they keep the animals more busy with games or foraging. But Linn can reassure: "The zoo's animals don't become lonely, many live in social groups and can interact with each other. And from us they get the optimal care and stimulation."

While some animals seem to miss people, the pygmy goats born just before Easter have yet to get used to two-legged visitors. "They're the shyest goats we've ever had," Linn reports. With the first lockdown, the dwarf goats' petting enclosure was closed and since then, children and adults have not been allowed in. "They haven't had any direct human contact except for the keepers," the curator says. But she is confident that even this hurdle will be overcome by the animals.

All keepers have basic knowledge in caring for the animals, yet not every keeper can care for every animal. "Especially handling dangerous animals like the big cats or gorillas requires a certain routine when it comes to safety precautions. And in the exotarium or with the birds, the employees have a special expertise, for example, when it comes to food. They're hard to replace then, too, or it would take too long to train a new colleague." Staff who normally work at the cash desk are deployed in other areas. Especially in autumn, however, the leaves of the old trees on the zoo grounds are sometimes left lying around for longer. The animals do not mind, and the zoo prefers to use the power reserves of the employees for the care of the animals.

Men apes are particularly endangered by the virus

The situation is particularly difficult in the Borgori Forest. Because great apes can fall ill with the vast majority of diseases that also threaten humans. Even a supposedly "harmless" flu virus can kill a cub. "In principle, they could probably also fall ill with Covid-19, so far there is no known case. Nevertheless, we have to be very careful," explains Linn. That's why the Borgori Forest has also been closed to the public since the end of March. Almost 30 apes live there. The bonobos, gorillas and orangutans only have contact with their keepers. These are also only allowed to stay in the ape house during their entire shift. The food for the inhabitants of the Borgori Forest is delivered as if through a sluice - contactless. Bonobos, for example, are very rare in Europe and Frankfurt Zoo has an important population in the European breeding program. "It would not only be dramatic for us personally if they died from a corona infection, but also for the European bonobo population," says Linn. At worst, an infected monkey would become a super-spreader in the Borgori Forest. That's why keepers in the monkey house are also strictly required to wear masks to protect the animals from infection.

An opening needs a new concept

Staff wear masks throughout the zoo grounds, and FFP2 masks in areas with potentially endangered species. "To protect the animals, this is essential. Cats and maggot-like animals like minks are also at risk." It is still uncertain when the zoo will be able to reopen. Of course, everyone hopes visitors will be allowed to return soon, but there will have to be a different approach there, too. "Should we be able to open in the winter months, we have to consider that due to the weather, people will spend more time in the animal houses. This will require a different hygiene concept. That would be a new challenge," explains Linn. Visitors are very important for the zoo's work - because the best way to provide information about topics such as nature and species conservation is directly on site. The educational mission is of utmost importance for Frankfurt Zoo. "The topic of Corona in particular is topical and, with regard to the origin of the virus, shows what happens when humans increasingly deprive animals of their habitat. Zoonoses like Ebola, HIV or Sars keep coming back. But the intervals are getting shorter and shorter," explains Linn, also with a view to the scientific reappraisal of the current pandemic.

Since March, life at Frankfurt Zoo has been different, marked by discipline, deprivation, changed work routines and many precautionary measures - all for the time when children's laughter, amazed and beaming human and animal eyes meet again.

For more information on the latest happenings at the zoo, visit http://www.zoo-frankfurt.de