A uniform pavement for the Römerberg
from FFM Aktuell 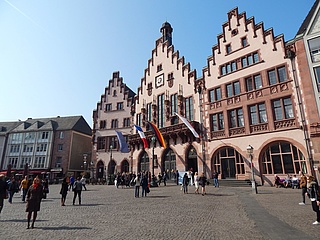 (ffm) The Römerberg in the heart of Frankfurt has seen repeated construction work in the recent past - with the result that the natural stone pavement had to be broken up and resealed for development work at various points on the Römerberg. To avoid leaving an unsightly patchwork, the city's Department of Road Construction and Development (ASE) has systematically taken matters into its own hands. Since September last year, the ASE has been replacing the temporary asphalt pavement in the appropriate places with higher-quality natural stone paving. Now the work has been completed.

In Saalgasse, large-format basalt paving was used for the beautification work instead of the so-called small-format porphyry paving. The newer paving stones are still slightly different in color from the older ones at first, but due to the influence of the weather, the difference will give in the coming months.

The city has invested around 300,000 euros to ensure a uniform appearance at Römerberg. The material costs for the natural stone paving are borne by the companies that had broken up the road surface for the purpose of construction work