A visit to the new old town
from FFM Aktuell 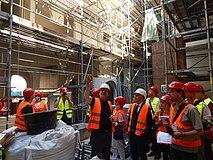 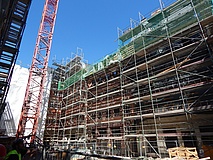 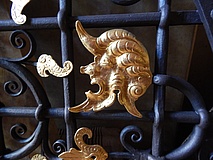 It will still take a little while until the work on Frankfurt's new old town will be completed. At the end of 2017 it should be so far. Then the interior finishing of the now almost completed shell buildings, as well as the design of streets and squares should be completed, followed by the grand opening, which is planned for 2018. But although a lot of water will run down the Main until then, the not uncontroversial project has been the most exciting and most discussed construction site of the city for quite some time.

Mayor Peter Feldmann has now been informed on site about the construction progress and the press was allowed to accompany him. Even though most of the buildings are still covered by scaffolding and therefore only a few details can be made out, one could easily imagine during the short tour through the old town what it will look like in about one and a half years. It also became very clear with how much sensitivity and attention to detail old components were joined together with new materials and how much effort was put into reconstructing what had long been lost. This can be seen very clearly in the "Golden Scales", for example, in which not only original sculptures in the form of lion heads have been fitted in. Also refurbished and reconstructed grilles with filigree decorations can be seen here. The new grids were produced in the Erzgebirge in five months of work and are indistinguishable from the still preserved original grids.

The tour also made it clear that the new Old Town will be nowhere near as cramped as it looked in initial sketches. The Hühnermarkt, for example, the central square of the old town, appears much larger in reality than in the animation used to present the project. The Stoltze Fountain, which was recently removed from Stoltze Square, will be located here, and gastronomy and small shops will then enliven this square. Although this will of course be a tourist magnet, the square is primarily intended to be a place for Frankfurters. The shop concept is also geared towards this, which will not consist of souvenir shops or well-known chains, but of local manufactures such as jewellery, flower arrangements, leather goods and others.

For all those interested, there will be the opportunity on Saturday, 15 October 2016, to get a first impression of the new area for themselves. This is because during the topping-out ceremony taking place on that day, there will be guided tours of the Old Town throughout the day. Incidentally, Lord Mayor Feldmann will personally lead the first two of these tours. Further information will of course be available from us in good time before this open day! (Text: Sebastian Betzold)