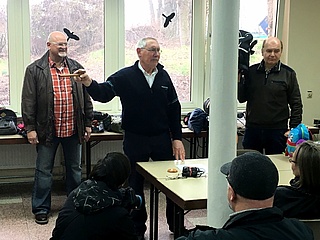 (ffm) The light-flooded room in the Bahndepot at Eckenheimer Schwabstraße 18 is filled to capacity. About 150 people, including young people, older ladies and gentlemen or mothers with children have gathered to make a bargain - they are all united by curiosity and interest in the lost treasures that go over the table here. Like every first Friday of every two months, the Tram Depot is transformed into a hotspot for collectors, hunters and onlookers. From 3 p.m. onwards, the bidding at the VGF-Fundsachen-Versteigerung is open. During the auction there is a lot of coming and going.

The attendees all seem electrified by the tension in the room. Helge Linder and Harald Marquardt take this very calmly. Both auctioneers have their eyes firmly on the audience. They seem to be familiar with their roles and are not disturbed by the hustle and bustle of the crowd. Then a headdress appears, with a Hessian tongue one of them announces: "And here is another fashion highlight - a witch's hat", while he puts the hat on his head. Giggles resound through the room. As soon as a new item is up for bid, the two men are on the lookout again, their arms darting in the air.

The minimum bid of five euros is driven up sometimes faster, sometimes slower, until the hammer falls depending on the desirability of the item. In the process, some people engage in heated duels, such as over a bicycle in excellent condition. Across the room, the bidding increases - from 20 euros even in 2-euro increments - for the bike, which finally finds its new owner for 50 euros.

Mostly backpacks and clothing items such as jackets or pants are auctioned, but also left behind digital cameras, umbrellas, scarves or a teapot find their way from the track to the bidding table this time. Things get particularly interesting when backpacks or bags are opened and their contents turn out to be either a treasure or a loser for the bidders. This was the case, for example, with an inconspicuous sports backpack by Adidas, which was snatched up by a gentleman for 25 euros and, with several brand-name sports shorts and an apparently original Croatia jersey including Rebić flocking, could easily fetch the bidder a multiple of the bid. Also various gym bags unearthed contents such as movies, video games or the board game "Mensch ärgere dich nicht" in original packaging.

On the hunt for a good time

You easily get into conversation with your seat neighbor. This is 56-year-old Klaus Müller from Frankfurt's first time at an auction. He says he was gripped by curiosity when he heard about this event through colleagues at work: "That sounded quite exciting then, good bikes for under 100 euros, which is why I just wanted to drop by." While he had no express interest in any of the items on offer, he could imagine joining the race if he found a good bike. In the end, though, his arm stays down and other new owners get to enjoy the two dozen or so bikes.

Bidding? It's that easy!

But what kind of things are these that are actually becoming prize beaters here for seemingly small amounts of money? Quite simply, all found objects, which remain in the trains of the VGF and longer than three months - so the legal retention period - are not collected, land on the bidding table. So if you like second-hand or just the atmosphere of bidding, you can go bargain hunting yourself on 3 May. As always at the Eckenheimer Depot starting at 3 pm. More info at https://www.vgf-ffm.en/service/service-fuer-fahrgaeste/fundbuero/