A worthwhile "view from the bridge"
from FFM Aktuell 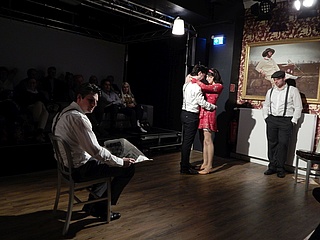 Theatre is generally a very direct experience, since the distance that exists between audience and actors in the cinema, for example, does not exist. Nevertheless, there is also a certain aloofness in the theatre due to the clear demarcation between stage and audience. The Alte Brücke Theatre is now attempting to break down this boundary in a bold experiment. In the production of Arthur Miller's "A View from the Bridge", part of the audience is moved onto the stage. The space freed up in the auditorium serves as a playing area for the actors - limited to a minimum of equipment and surrounded on both sides by the audience. This creates a closeness and an intensity that is hard to resist.

And so you follow the story of the dock worker Eddie Carbone (great: Christoph Stein), who cares a little too much for his niece Catherine (Maya Pinzolas). When Eddie and his wife Beatrice (Simone Wagner) take in his two cousins Marco (Jan Peter Nowak) and Rudolpho (Felix Bieske), illegal immigrants from Sicily, it turns his life completely upside down. There is not only the constant fear of being caught by the immigration authorities. It's also the feelings that develop between Catherine and Rudolpho that cause ever-increasing tensions - tensions that lead Eddie to make a disastrously bad decision.

Alexander J. Beck and Sabrina Faber's production of the play is a very engaging theatrical experience, and not just on a spatial level. It is also the fact that the drama, written in 1955, still has an inherent relevance in 2017 that makes "A View from the Bridge" so stirring. The fact that only two chairs and sometimes a suitcase are used as props on the small stage also ensures that the play of the actors has a completely unadulterated and enormously direct effect on the audience. While at the beginning there is still a certain easiness and there are even some amusing moments, Eddie gets more and more into his fear of losing Catherine and his jealousy towards Rudolpho, which makes for many oppressive and intense moments. Especially the last minutes really get under your skin, which is due to the very good acting of all involved, but also to the closeness between actors and audience.

"A view from the bridge" is an experiment of which it can be said that it has been completely successful. Once again, the Alte Brücke Theatre proves to be a great asset to Frankfurt's cultural landscape with this production. This play should not be missed by lovers of very special theatrical experiences and of first-class American stage dramas. (Text by Sebastian Betzold) 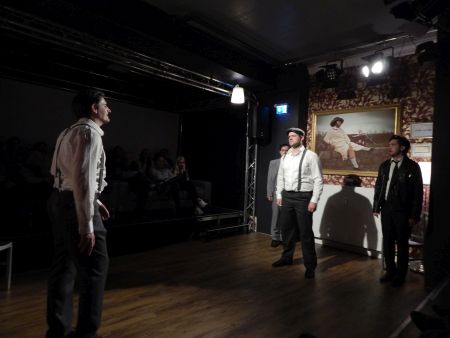