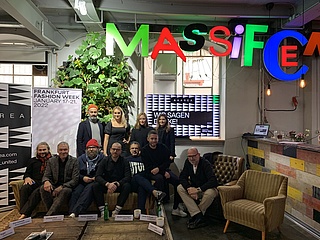 When it was announced at the beginning of 2020 that Fashion Week would be coming to Frankfurt, it was clear that the event would not be limited to the trade audience at the exhibition grounds. Rather, it was to become an event for everyone and take place throughout the city. In order to gather ideas about what could be done, the organisers of Messe Frankfurt invited eleven creative agencies from Frankfurt to a round table. It quickly became clear that with bundled know-how, different creative approaches and lots of contacts, it would be possible to bring very special events to the city together. So in the spring of 2021, a limited liability company was founded with eleven equal partners:

The managing partners are Lorenzo Bizzi from Nordisk Büro, Claus Fischer from Voss+Fischer and Florian Joeckel from guilty76 triple A and massif central. Co-partners are James Ardinast of Ima Clique, Amin Baghi of Esistfreitag, Steffen Ball of Ballcom Digital Public Relations, Madjid Djamegari of Lucille, Jesper Götsch of Jazzunique, Eklil Qani of Nonot Studios, Frank Lottermann of Nordisk Büro, Felix Neuland of Neulandherzer and Stefan Weil of Atelier Markgraph. The name of the GmbH should be program: AAAREA, derived from Access All Area, wants to turn the whole city into an event stage, even places where there is otherwise no public traffic.

After the first edition of Frankfurt Fashion Week (FFW) took place almost exclusively digitally, this is set to change - pandemic permitting - as early as January. Because then AAAREA wants to turn the city into a very special fashion experience as part of the first physical FFW. Corona-conform formats such as vernissages or installations are planned at various locations such as the B-level of the Hauptwache, in the Jumeirah Frankfurt, in the Bahnhofsviertel or also in the Massif Central. This is also where the programme of the first AAAREA Festival was presented on Monday, 22 November.

The idea is to use the various facets of the Main metropolis to present the different facets of fashion. The trade fair, the city and the fashion industry are to benefit equally from this interaction. For example, when the not exactly pretty B-level of the Hauptwache is transformed into a walk-in fashion magazine for a few weeks. When interested visitors can look over the shoulders of young creatives at their creations in "Open Ateliers" in the Jumeirah Hotel or when the foyer of the Hilton Hotel is transformed into a small gallery on the penultimate day of the FFW. Or when a melange of music, art, cuisine and fashion is presented at various locations in the Bahnhofsviertel.

"With AAAREA we create encounters, experiments, space for experiences and interdisciplinary discourse. Everyone can participate - front row", explains Lorenzo Bizzi. He and the other managing directors, Florian Joeckel and Claus Fischer, together with the eleven AAAREA agencies, put together the fashion-based programme for the launch of the festival. One thing was particularly important: "Frankfurt Fashion Week should be a happening for everyone. That was our concept from the very beginning. Fashion is versatile. Fashion is inspiration. And fashion is fun. That's what we will show during Frankfurt Fashion Week. In showrooms, galleries, bars, restaurants and clubs - all over the city. It will be unique," says Olaf Schmidt, Vice President Textiles & Textile Technologies at Messe Frankfurt.

But AAAREA doesn't just want to be present in the city during FFW. Rather, it also wants to establish Frankfurt as a fashion city away from the fair. In addition, they would like to present Frankfurt artists who deal with fashion and thus make them visible. The perfect tool for this is the AAAREA magazine, with which the local fashion world can be experienced digitally at any time. For the magazine, which can be found at www.aaarea.com, they collaborate with local photographers and authors from the city: A Magazine about Frankfurt the Fashion City by Frankfurtians! "We have a lot of interesting and creative people in Frankfurt and the Rhine-Main region who are very progressive with the topic of sustainability in fashion and who put this into practice. We want to involve these people in our magazine, and in perspective also at our events," explains Claus Fischer, managing partner of AAAREA GmbH.

It may still be uncertain how and to what extent Frankfurt Fashion Week will take place in January 2022. What is certain, however, is that Frankfurt will definitely benefit from the merger of the eleven creative agencies to form AAAREA, both as a fashion and as a cultural location. When the first events for the FFW start, we will of course keep you up to date. Until then, you can check out the magazine at: www.aaarea.com