Aardvark IRMO is back at Frankfurt Zoo
from FFM Aktuell 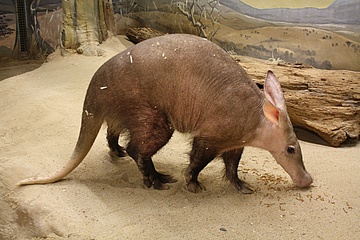 Welcome back, IRMO. The aardvark, a son of ELVIS who passed away in the summer of 2018, was born at Frankfurt Zoo in 2002 and moved to Antwerp a year later, where he lived until 2008. Then it was on to Burgers Zoo in Arnhem, the Netherlands, for him. He has already had eleven offspring. Now they also hope for that in Frankfurt, where IRMO will live together with 11-year-old ERMINE in the night animal house.

But for now he will stay separated from the female and his half-sister MEMPHIS, who was born as the last cub of ELVIS in July 2018, in order to get accustomed in peace.

Director of Culture Dr. Ina Hartwig is delighted about the new addition: "It is difficult to look at the history of the Frankfurt aardvarks with scientific sobriety, because it is simply too beautiful: now, with IRMO, a son of the well-known ELVIS is coming back to the zoo to continue to provide offspring here. This will please many Frankfurt people, and I sincerely hope that he will get along well with his new female."

Young animal MEMPHIS will move to another zoo in a few months. "The aardvark breeding program coordinator will make a recommendation for a zoo where there is a suitable mate for MEMPHIS. At about one year of age, the young animals can leave their mothers," explains zoo director Dr. Miguel Casares.

The aardvark (Orycteropus afer) is the only living representative of the order of tube-toothed animals and therefore occupies a truly special position among mammals. The most important sensory organ is the nose, but the conspicuous bag-like ears are also well adapted to the orientation of the primitive animals at night. The zoo can look back on a long history of keeping aardvarks: With interruptions, the African savannah inhabitants have been shown and successfully bred in Frankfurt since 1925.

Aardvarks can only be seen in Germany in the zoos of Frankfurt, Berlin, Cologne and Saarbrücken. Their natural habitat is savannahs and open scrubland south of the Sahara. Currently, the World Conservation Union IUCN does not provide any information on population trends. The reason for this is the reclusive lifestyle of the animals, which makes it extremely difficult to record the population size.