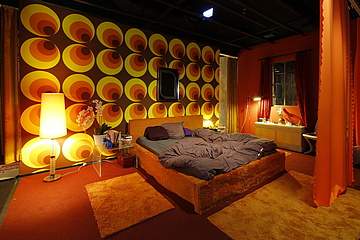 Anyone familiar with Michel Gondry's films "Anleitung zum Träumen", "Vergiss mein nicht" or "Der Schaum der Tage" knows what surreal dream worlds the French filmmaker can conjure up on the screen entirely without the aid of computer effects. Again and again Gondry uses all kinds of practical tricks with a charmingly childlike enthusiasm and thus creates playful fantasy worlds in which one likes to lose oneself in order to discover the many loving and original, sometimes wonderfully spun details. And so it is also always noticeable to his actors how much fun they had to be allowed to act in the sets bubbling over with inventiveness.

And that is exactly what you can now experience. With "Abgedreht" the Filmmuseum has brought a very special exhibition project to Frankfurt. The whole thing is based on the film of the same name by Michel Gondry, in which Jack Black and Mos Def play two friends who accidentally delete all the cassettes in a video store and then try to re-record the films themselves. And that's exactly what visitors to Michel Gondry's Film Factory are supposed to do. In three hours, they are supposed to shoot their own film in various settings. It doesn't have to be perfect. The main thing is that it's fun.

Already in twelve different locations, the project has brought people to give free rein to their creativity and work closely together with friends, but also with complete strangers, for three hours to create something entirely their own. The vision of collaborative filmmaking that Gondry pursued with his first film factory in New York can now also be realized in Frankfurt. And this really is a must-see for anyone who loves films or simply wants to be part of a very special community experience.

You can also find more info HERE in our event calendar