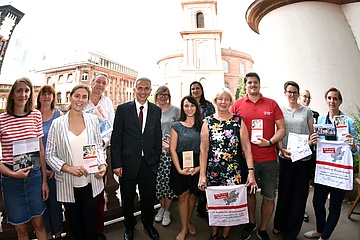 In almost all areas of everyday life, there are people who volunteer. And without this commitment, many things simply would not function as we are used to. In order to highlight the importance of voluntary work and to inspire people to get involved as well, there is the nationwide Civic Involvement Action Week. Frankfurt will participate in this action week again in 2019. For example, the city is publishing a brochure listing the individual events of the week. In addition, the city will hold a volunteer fair on Saturday, August 31, in the Römer.

"Promoting volunteerism is a central task that is close to my heart. And it is personally important to me to be responsible for it," said Lord Mayor Peter Feldmann during a press conference. The Lord Mayor called on citizens to take advantage of the campaign week to find out about the activities and offerings of voluntary organizations. Perhaps one or the other will find inspiration to become active themselves in some area.

In the context of the action week, among other things, the event Culture for All will take place, an open day will offer information about the culture pass. The DRK shows a photo exhibition with photos of refugees who have photographed their new home Frankfurt. The Diakonie invites you to a summer party at a shelter for refugees on Poloplatz. The Protestant Family Center Höchst organizes an information afternoon. The Frankfurter Verband and the ArbeiterKind organization are holding an open house. The Agaplesion Markus Diakonie invites you to a lecture on a dementia partner course. The Fachstelle für katholische Stadtkirchenarbeit has created an open market of opportunities and at the Stiftung Polytechnische Gesellschaft there is a project marketplace.

In addition to the Action Week brochure, the Volunteer Fair on Saturday, August 31, from 10 a.m. to 4 p.m., at the Römer is an important contribution by the City of Frankfurt. The focus this year is on the topic of "commitment in the district". 40 organizations will present projects and recruit helpers. "We use the action week and our fair to bundle activities and offers around volunteering, to appreciate them and to draw attention to the issues," Feldmann emphasized. The citizens should gain an insight into the important work of the organisations. In this way, he said, the city also wants to strengthen volunteering and promote it so that as many people as possible get involved.

The Chairman of the Board of the Stiftung Polytechnische Gesellschaft, Professor Roland Kaehlbrandt, emphasized that promoting involvement is a special focus of the Stiftung Polytechnische Gesellschaft's work. "Frankfurt thrives on an active citizenry. That's why we encourage young people to implement their own ideas in their district as district ambassadors. In doing so, they also learn how it works to successfully integrate an honorary office into their everyday lives alongside school, studies or work. It's worth getting to know the new district ambassadors and their projects at &sbquo;Hallo Frankfurt', on 20 September, on the &sbquo;Freigut' ship at the Eisernen Steg."

The campaign week brochure presented by Mayor Feldmann will be distributed throughout Frankfurt. The city leader thanked everyone who had taken part and helped to shape the week of action in Frankfurt. He said this was an important sign of civic engagement.