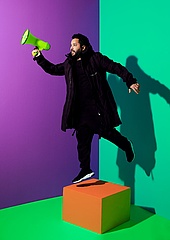 When on Saturday, the 25th anniversary of the birth of the new generation of the family April 2020, the 7th Spring Ball in the Gesellschaftshaus Palmengarten, then the guests of the charity gala in aid of the Palmengarten and Botanical Garden Foundation can look forward to a very special star guest: Besides the band Muzika and the Varietéartists of the Tigerpalast, Adel Tawil will perform on the stage of the ballroom in the Gesellschaftshaus. Thus a real top act could be won for this social highlight. After all, the successful pop musician, songwriter and producer can already look back on an 18-year career in the music business. Until 2012 he was on tour with the band Ich + Ich on the German stages and since then he has celebrated great success as a solo artist. All of his three solo albums so far made it into the Top 10 of the sales charts.

With his second album "So schön anders" Adel Tawil even reached No. 1 of the official album charts and songs like "Lieder", "Ist da jemand" and "Tu m'appelles" quickly entered the Top 20 of the German single charts. Also the current album "Alles lebt" could continue the singer's success story and proves how much innovative power is in him and that he has the ability to reinvent himself again and again. Thus, in "Alles lebt" great emotions meet a unique voice and an invigorating sound that combines to really great art. With his urban sound he will create the right party atmosphere at the Spring Ball and make the guests in the hall dance. Frühlingsball, is happy that Adel Tawil could be won over for the benefit gala: "We are happy that we can present a well-known German-speaking artist at the Frühlingsball, who stands for good mood and great danceable music. I am sure that the ball guests will dance and sing along when Adel performs its well-known hits".

Over 1,500 ball guests, including the Frankfurt City Society from the fields of culture, business, sports and politics, are expected to attend the 7th Spring Ball. Besides Adel Tawil, the well-known band Muzika from London plays for dinner and dancing. Artists of the Tigerpalst Varietés present artistry of the extra class. The ball will be moderated by Evren Gezer, who will lead through the evening in a skillfully charming manner. Chef Steffen Haase, in cooperation with 2-star chef Andreas Krolik, will spoil the guests with the finest culinary delights.In the galleries, the Spring Ball also offers the best entertainment programme combined with the finest gourmet dishes prepared by star chef Coskun Yurdakul from the Tigerpalast, Hessian TV chef Mirko Reeh and from Sander Restaurant from MyZeil. The Kingkamehameha Club Band and DJ Simoné animate the ball visitors to dance until the early morning hours.

For the first time, a silent auction will be held as part of the 7th Spring Ball, where guests can bid discreetly on unusual and hand-picked items. As in previous years, the Palmengarten and Botanical Garden Foundation will benefit from the proceeds. This is committed to the long-term and sustainable safeguarding of the two traditional institutions in the centre of Frankfurt. In addition, it develops future-oriented projects, with and for the Palm Garden and the Botanical Garden. In this way, it supports both gardens in facing the challenges posed by social change and climate change and in leading them into the future.

In addition, the awarding of the "Green Footprint" prize, presented by FES Frankfurter Entsorgungs- und Service GmbH, to an institution or Frankfurt personality will take place for the first time during the Spring Ball. The idea, creative power and content-related performance for social commitment to the topic of sustainability are honored and awarded.The following candidates are available for the "Green Footprint" award.</1. bee rescuers educational project - "Bee Rescuers Manufacture"</p>

The prize is endowed with 5,000 euros and will be presented to the winner*in the ballroom stage on the evening of the ball. The jury for the "Green Footprint" consists of FES Managing Director Benjamin Scheffler, organiser Robert Mangold, Dr. Katja Heubach, Stiftung Palmengarten und Botanischer Garten and co-organiser Sven Müller.

Anyone wishing to order tickets for the parquet flooring should hurry, as this is almost sold out except for a few seats. Tickets of the other categories are still available and can be ordered:

Tickets and further information about the 7th Spring Ball can be found at: