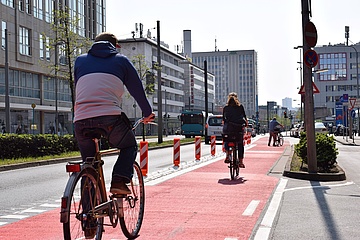 For some time now, Frankfurt has been striving to become as bike-friendly a city as possible. New cycle path markings, parking and repair facilities or even new cycle path signs are supposed to help cyclists* feel safe in the Main metropolis. Apparently this plan is working, because in the ADFC Bicycle Climate Test 2020, in which 230,000 cyclists nationwide voted on the bicycle-friendliness of 1,024 cities, Frankfurt made it to one of the top places for the first time. The city is now in third place, behind Hanover and frontrunner Bremen.

However, mixed in with the joy of the good ranking in the survey, which is conducted every two years, is a bit of disillusionment, as overall satisfaction among cyclists remains at a low level with a school grade of 3.9. Some of the reasons:

- 80 percent of respondents think bike lanes are too narrow.

- For 75 percent, lack of parking controls on bike lanes is a problem.

This is an important signal for the bicycle club ADFC and the Federal Ministry of Transport to call on states and municipalities to now quickly use the money from the "Special Urban and Rural Programme" and from the funding programme "Cycling Network Germany" for the nationwide expansion of cycling infrastructure. After all, regular cycling not only promotes health, it is also an important building block for climate protection, especially in large cities. For ADFC Vice Chair Rebecca Peters it is clear: "Since Corona it has become abundantly clear: People in Germany want to cycle more - and on good, wide cycle paths. However, everyday experience still shows that cycle paths are too narrow, blocked or interrupted by road works. Frankfurt am Main, Berlin and Düsseldorf show that cities do not need decades, but can quickly become more bicycle-friendly. We need comprehensive cycle path networks throughout the country now. The window of opportunity is wide open!"

Frankfurt, with its significant improvement (grade: 3.7, previously 3.9), certainly serves as a role model. By the way, the cyclists particularly praised the better control of parking violations on cycle paths in Frankfurt.

The winners of the ADFC Bicycle Climate Test 2020 were:

For all results and more info, visit www.fahrradklima-test.adfc.de