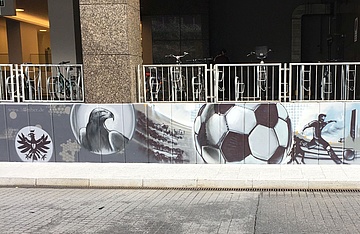 It wasn't that long ago that Eintracht coach Adi Hütter confirmed he would stay at Eintracht. A good and logical decision, it seemed, after all the club can look back on an excellent track record, especially in recent weeks. However, Hütter is now retracting his statement and has announced that he will be leaving Eintracht Frankfurt at the end of the season to join Borussia Mönchengladbach. The early exit from his contract, which actually runs until June 30, 2023, is made possible by a special clause in his contract. The head coach informed the club's board of directors of his decision late on Monday evening and the professional team this Tuesday morning.

Explaining the move, Adi Hütter said, "The decision to turn over a new leaf for the new season was not one I made lightly. I have experienced three incredibly successful and intense years here, which I would like to conclude with an outstanding result together with the team at the end of this season. We have a historic opportunity. All that matters to me now is Eintracht's success. We want to defend our lead and qualify for the Champions League. We subordinate everything to this goal."

Sports director Fredi Bobic, who will also leave the club in the summer, says: "Adi Hütter has done an extraordinary job for Eintracht Frankfurt and can crown the season by reaching the Champions League. All our attention will be focused on this goal in the next five weeks until the end of this season."

Adi Hütter joined Eintracht Frankfurt for the 2018/19 season from BSC Young Boys in Bern, succeeding Niko Kovac. With 152 points in 96 Bundesliga games so far, he has a points average of 1.58 per game. In his first two seasons, Hütter had led the club to seventh and ninth place. Ahead of matchday 29, the current 2020/21 season is in fourth place. Hütter hopes to qualify Eintracht for the Champions League before his departure.