Aerial bomb: thanksgiving event for all at Paulskirche
from FFM Aktuell 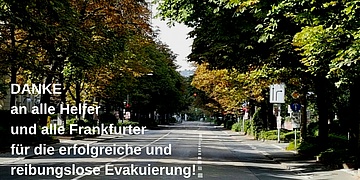 (kus) "Dieter Schwetzler and Ren&eacute; Bennert from the explosive ordnance disposal service defused the bomb in Frankfurt. My thanks go to them, but also to Police Commissioner Gerhard Bereswill and the head of our fire department Reinhard Ries with all their staff, as well as all emergency personnel and helpers," said Mayor Peter Feldmann on Monday, September 4.

"The overwhelming majority of our citizens have reacted calmly and with great cohesion in the face of the stress. I am very pleased about this."

"The City of Frankfurt am Main would like to say thank you once again to everyone with an event in the Paulskirche. This elaborate and logistically extremely demanding evacuation operation and the complicated defusing have worked out excellently. We want to pay tribute to this with this evening," said Feldmann. "We invite police, firefighters and rescue workers. Some affected residents will also get the opportunity to be there."

The event is scheduled to take place in the coming weeks.