After chaos at the weekend: Langener Waldsee will be closed
from FFM Aktuell 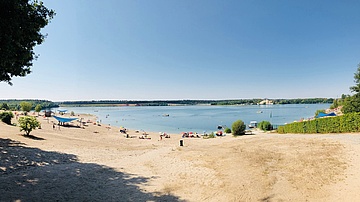 This is really annoying: Because of some obstreperous people, who just don't want to follow rules, the lido at the Langener Waldsee will now - of all things in the hottest week of the year - be closed completely and until further notice. The security for the employees and for the visitors cannot be ensured under the present circumstances. The people in charge actually wanted to prevent this drastic step by closing the car park at the weekend and calling on visitors to come by bike, on foot and by public transport. But that didn't help and so the city of Langen and the Bäder- und Hallenmanagement Langen GmbH (BaHaMa), in consultation with the police and fire brigade, agreed to close the popular excursion destination in response to the chaotic conditions that prevailed on the B44 and the adjacent forest paths over the weekend. In addition, an online ticket system will be set up for the Langen leisure and family pool. Access to the bath in the pond road is then only possible with season tickets or pre-purchased tickets.

"We are sorry for the 80 percent of visitors who behaved decently," says Mayor Jan Werner. "But there is, unfortunately, a significant percentage of the obtuse. The risk of forest fires is simply too high. Therefore, we must implement what we have repeatedly announced, now with a heavy heart."

"We had hoped for a clear signal from the closure of the parking lot in the bath, which now times can not accommodate the vehicles of all visitors," say the BaHaMa managing directors Manfred Pusdrowski and Joachim Kolbe. "For many, this has also had an effect. So many bathers came as never before by bike or on foot that we reached maximum capacity despite the closed parking lot at the lido."

Despite the clear announcement, many people from the entire Rhine-Main area had again made their way to the lake by car or motorcycle during the hot holiday weekend. This would not be a big deal, they had then also shown themselves to be reasonable. But many of those who came by car did not let themselves be stopped even by police and security. They parked their vehicles on the partly four-lane federal highway or in the forest. The police alone wrote more than 300 tickets between Friday and Sunday. Due up to 150 euros, in addition, there may be another point in the traffic offender index in Flensburg.

On the B44, there were numerous extremely dangerous situations. There is an extreme danger of forest fire in the forest. The Hessian Ministry of the Environment has declared the second highest forest fire alert level. In addition, the rescue routes were partially impassable. Since all appeals have been of no use, the closure of the lido has now been decided as a final consequence with immediate effect.

After the situation in the leisure and family pool in the Teichstraße was relatively relaxed in recent weeks, there was also a rush of visitors there last hot weekend. This led to partly long queues in front of the entrance. In order to avoid this in the future, an online ticket system will now be set up after all. It is expected that tickets will be available for purchase on the city's website www.langen.de from Friday onwards. Admission will then only be possible with these tickets or pre-purchased season tickets for the municipal pools. There will no longer be a ticket sale at the entrance.