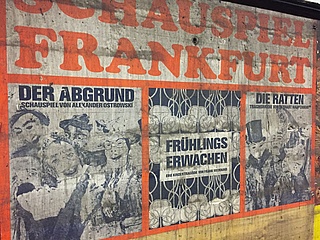 The construction measures in the subway station Dom/Römer go into the next round. That construction is going on vigorously here, you can already see for some time. The ceiling cladding has been removed and construction grids and materials are ready for use. But a real special feature can also be seen: Removing the current billboard revealed old advertising posters from the early 1970s, including those of the zoo, the Schauspiel and the Automobil Messe. Also a little piece of city history that could be admired here for a few days.

The work will again mean some inconvenience for passengers travelling on the U4 or U5 for a few days, as the lines will Not run between Konstablerwache, Hauptbahnhof and Bockenheimer Warte from Wednesday 14 February until around 1.30am on Sunday 18 February. At Konstablerwache, the U5 line towards Preungesheim will depart from the U5 platform towards Hauptbahnhof. Afterwards, no subway trains will stop at the Dom/Römer station for the same reason until probably the end of July 2018.

The night runs of lines U4 on the nights of 16 to 17 and 17 to 18 February can take place regularly despite the work. The U4 will resume service as scheduled at approximately 1:30 a.m.

In the course of the overall fire protection renovation, smoke protection partitions will be built and a large part of the technical components installed in the Dom/Römer station will be removed and replaced. Despite the extensive work, emergency exits will still be possible in the station; the escape routes will be open at all times. The project costs around 5 million euros.

There will be two further closures of the line between Bockenheimer Warte and Konstablerwache lasting several days by the end of June as part of the project.