Agreement signed to keep Karstadt on the Zeil
from FFM Aktuell 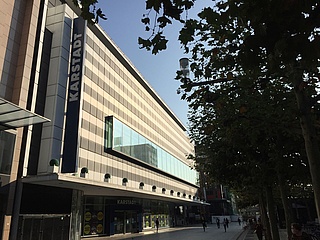 As we have already reported to you HERE, the Karstadt store on the Zeil, which was supposed to close at the end of October, has been saved at the last moment. The way to get there, however, was anything but easy. The breakthrough in the difficult negotiations was brought about by a joint agreement between Lord Mayor Peter Feldmann and Head of Planning Mike Josef with Galeria Karstadt Kaufhof GmbH and Signa Holding as the owner of Galeria Karstadt Kaufhof. The core of the letter of intent is the decision that Karstadt will remain on the Zeil for a further four years and four months and operational redundancies are ruled out during this time.

Since Monday, 28 September, the rescue has also been sealed on paper and is thus finally in the bag! At the works meeting, Lord Mayor Peter Feldmann signed the important agreement. "It was a tough fight that cost the employees a lot of energy. But it was worth it and I am very pleased that we were able to save this department store rich in tradition," said Feldmann. The fact that the jobs of the 240 Karstadt employees could be saved was an important sign, especially in times of Corona. For other employees at the site, the declaration also brings a perspective.

Minister President Volker Bouffier had also come out in favor of preserving the site. His state secretary Michael Bußer spoke at the works meeting. He stressed the importance of preserving the store, but also reminded: "Unfortunately, there are many employees at Galeria Karstadt Kaufhof whose jobs could not be preserved at other locations. Our solidarity goes out to them." Head of Planning Mike Josef was also present, calling the agreement "forward-looking": "I am very pleased that even in these times we have success stories that can be attributed to broad cooperation between the city, the state, the companies and trade unions involved, and especially the employees. We are now not only giving employees security for the next few years, but also preventing protracted vacancies directly on the Zeil."

The agreement not only regulates the future of the Karstadt location. It also outlines the development on other key sites in Frankfurt's city centre. The aim is to avoid long vacancies. Contrary to reports to the contrary, the letter of intent does not make any firm commitments to Signa Holding to realise one or more building projects. All projects must be applied for and approved through the usual channels. In the case of high-rise projects, a development plan procedure is also necessary.