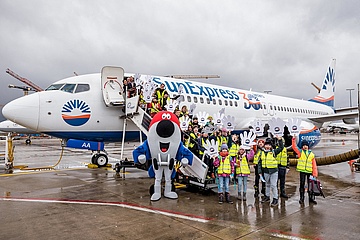 Simply swap the playground for the apron of Germany's largest airport in Frankfurt. Once sitting in the cockpit of a Boeing 737. Meet a real pilot and his crew and ask them questions. Finding out how an aircraft can actually fly, even though it weighs tons, and much more: Around 40 third-graders from the primary school in Ried Reichelsheim and the Marc-Chagall-Schule in Mainz made this dream come true on Tuesday, January 28, 2020.</Last October, Fraport AG and RheinMain4Family, a joint venture of Lufthansa and Turkish Airlines, called on Hessian elementary school children to share their ideas on the topic of "Flying in the Future" as part of a competition for schoolchildren. The initiators of the project <strong>"Fluggis fliegendes Klassenzimmer" were pleased to receive creative, colourful and technically extravagant entries from the third and fourth graders from the Rhine-Main area.

An eventful trip to the Airport Frankfurt awaited the two winning classes: The day started in Terminal 1 with a security check and boarding pass. Afterwards, the young guests learned exciting and informative facts about the airport during a tour of the airport with the airport mascot "Fluggi". The tour ended at the Boeing 737 of SunExpress, where two pilots and crew welcomed the school classes. In small groups there was a visit to the cockpit, a tour of the aircraft and a tour of the galley, i.e. the galley kitchen.

There was a lot to hear about safety, interior design and service on board. The students were able to ask the pilots and their crew a wide variety of questions. After all, the little inventors had to check whether their ideas for the future of flying were feasible. In addition to group photos with airport mascot "Fluggi", the third graders received tasty snack packages from the crew during their stay in the plane and, at the end, great surprise bags with gifts from SunExpress, Fraport AG and RheinMain4Family. 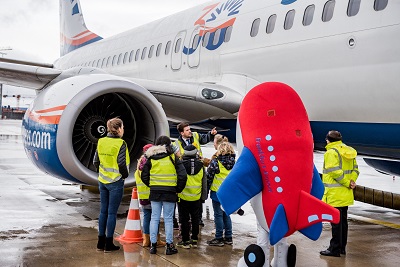 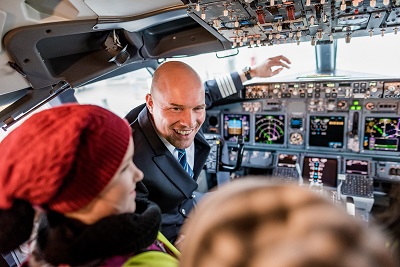 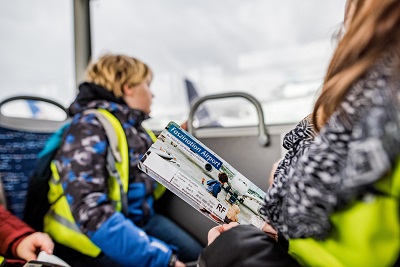 Not only the children of the winning classes were enthusiastic, also the initiators of the competition were happy about the all around successful event.

>em>"We were thrilled by the ideas of the children. We were particularly taken with the somewhat crazier, futuristic proposals. After all, with bookings via Amazon Alexa, VR glasses on board and food directly from the delivery service, we are also a somewhat crazy airline", explains Peter Glade, Commercial Director of SunExpress.

>em>"We organize many events for children, including the annual ‚Festival4Family‘, which takes place in the Commerzbank Arena. However, the events at Frankfurt Airport, which are the result of cooperation, are always an absolute highlight," emphasises Björn Fritsch, Head of Marketing at Trifels Verlag GmbH. That's why we and our partners are always thinking up special campaigns and events to inspire our younger guests and families", explains Jutta Weimar, Head of Visitor Service and Events at Fraport AG.