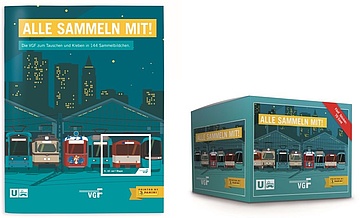 They are absolutely cult: the Panini collectible pictures. There are to popular films and series as well as to major sporting events such as the World Cup. On Thursday, May 19, a truly extraordinary Panini album will be released that has never been seen before in this form: for the first time, urban transport will be available for collecting and trading. On 144 Panini trading cards and the accompanying 36-page album, the exciting history of Frankfurt's local public transport is shown and deepened by explanatory information. Not only rail fans will enjoy this.

Included are pictures of rail legends such as the Duewag streetcars to the brand new "T" car as well as tunnel construction and stations, supplemented with exciting facts and figures. True to the motto: "Swap Hauptwache and 'T' car for Betriebshof Ost and Main Untertunnelung."

"The collector's booklet is a historical and at the same time entertaining overview of the company that has never existed before - with an insight into the diverse working world of our employees, who put in great effort every day," says Thomas Wissgott, managing director and labor director of VGF.

Collecting is worthwhile twice: Whoever has "fully embroidered" the album not only has a small sense of achievement, he or she can also win one of the many great prizes that the VGF is offering. Original BRIXIE trains of the VGF, the illustrated books, which the VGF has published for 150 years of streetcars in Frankfurt am Main, and a few VGF surprise packages will be raffled.

"A real sticky chronicle of Frankfurt's local transport with everything we've got on the rails in 150 years - from the horse-drawn trolley in 1872 to the 'T' trolley now in 2022. That's simply unique," says Michael Rüffer, VGF managing director of technology and operations, delighted at the launch of the project.

At the kiosk, an additional ten gold stickers hidden in the collection will possibly cause cheers: each gold sticker stands for an H0 model of the "U5" car.

For the production the VGF won the Hamburg sticker specialists of Juststickit, which have already brought more than 50 Panini collections on the market. Alexander Böker and Oliver Wurm from Juststickit say: "Frankfurt is the first city in the world to get its own Panini album about its local transport. We were curious ourselves to see if it would work. But it has turned out really great. The people of Frankfurt will have a lot of collecting fun with it and learn a lot about rail legends, tunnel construction and the latest rail vehicles in a very playful way."

"Everybody collect with us!" is the title of the VGF Panini booklet, is available throughout Frankfurt at many hundreds of kiosks, in all VGF ticket stores and in many supermarkets from Thursday, May 19. The website allesammelnmit.de will also be activated then. The album is available for 1 euro, the collection bags with five stickers for 70 cents. The sticker box with 36 collection bags can be purchased for 25.20 euros.

From Thursday, May 19, to Saturday, 21. May gives, it to the collection start in the B-level of the station "Hauptwache" albums for all collection fans free of charge.