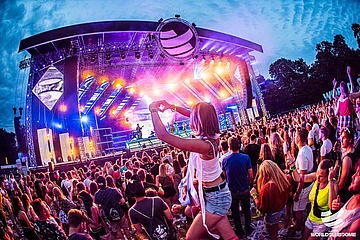 Just under a month to go before the BigCityBeats WORLD CLUB DOME, one of Europe's biggest festivals for electronic music, finally kicks off again after the Corona break. For three days, the entire Deutsche Bank Park site will then once again be transformed into the biggest club in the world. 2022 arises on the area around the living room of the Eintracht Las Vegas! Magicians, magicians, showgirls, dancers and much more will bring the necessary flair to Frankfurt! On 700,000 square meters will be a new district for three days - better said LAS VEGAS moves for 3 days to Europe.

Great events thus cast their shadows ahead. And now the impressive line-up has been completed with over 200 world-class artists such as David Guetta, Steve Aoki, Sven Väth and DJ Snake: Dutch house hero Nicky Romero and Indian-American star KSHMR also join the renowned line-up. The artists will perform on 25 different stages, representing the entire spectrum of electronic music.

From June 3 to 5, everything fans of electronic music love will be heard at the Deutsche Bank Park area: From House to Hardstyle, Techno, Trance to Progressive, Psy Trance and much more. With over 180,000 visitors over three days and in countless arenas, it is one of the most popular and musically diverse dance music festivals in the world. Already now can be said: After the two-year forced break, this popular event is back with a bang. With an overwhelming Sin City theme, Deutsche Bank Park in the heart of Frankfurt will be transformed into a Vegas-style entertainment palace. Sports fields will become helipads to fly in the world's biggest DJs, a wedding cathedral will host epic ceremonies with tens of thousands of guests, and the world's longest red carpet will become a famous walkway for visitors and artists.

The WORLD CLUB DOME is a creation of BigCityBeats. The German label, radio show, event and merchandising company has been at the heart of the country's electronic music scene for nearly two decades. They have grown from small beginnings to become one of the largest festivals in the world, and along the way, have always carried a burning passion for music in their hearts. BigCityBeats managing director and WORLD CLUB DOME founder Bernd Breiter delivers the sound of the metropolises to its visitors and brings the essence of all club music to the electronic music festival, expanding the event's program to include genres such as hip-hop and pop. One thing is for sure, the return of the "biggest club in the world" is not to be missed!