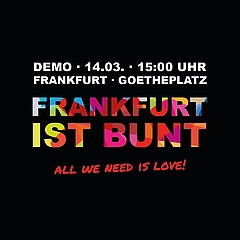 There is the following statement:</The demonstration "Frankfurt is colourful: All we need is love - no place for hate and violence", which was planned for Saturday, was cancelled by the initiators circle. On the occasion of, among other things, the attack in Hanau, about 10,000 people in Frankfurt wanted to take to the streets against racism on Saturday. <Now the demonstration was cancelled because of the coronavirus. "Health first," said one of the organizers. Mayor Feldmann thanked the union of "Frankfurt is colourful", the Römerberg Alliance, the Central Council of Muslims and the Association of Sinti and Roma in Hesse for the initiative: "It is important that we in Frankfurt send clear signals against racism and violence. However, I consider the decision of the initiators to wait and see how the pandemic develops. <strong>

The original message:</Since three years the initiative "Frankfurt is colourful" of the initiators Sia Sanei, Christian Rindermann, Alex Azary and the Zeleke brothers invites to the rally "Love is my religion - music is our language" on 01. September, the German World Peace Day. Every year thousands of people meet on Goetheplatz to dance peacefully and happily together with DJs from Frankfurt under the sign of love and tolerance. </p>

Both at this rally as well as at the other publicity-effective actions of "Frankfurt is colorful", the initiators, who are strongly connected to the Frankfurt club and music scene, are always concerned with setting a sign for a respectful and peaceful coexistence of the many people living in our city, regardless of their origin, skin color, religion or sexual orientation.

Naturally, the rally will take place again this year on September 1st. But in view of the events of the past weeks and months, which simply leave you speechless and stunned, the initiators have decided at short notice that Frankfurt must once again send a clear sign of solidarity!

The following statement was published:

"Racism and chauvinism are social problems, not individual cases!

The current social climate, especially the right-wing propaganda promotes racism. The responsible persons in politics and economy - but also each and every individual - must finally put the highest priority in the fight against anti-democratic and inhuman views!

The society of the many opposes racism and contempt for humanity.

Under the motto "All we need is Love" FRANKFURT IST BUNT wants to call and invite all true democrats and citizens of our city with heart, love and tolerance to a demonstration of cohesion and peaceful coexistence. </We will meet on Saturday, 14.03. at 3 p.m. on the Goetheplatz at the Goethe Monument and march across the city to the Paulskirche in Frankfurt, THE symbol of democracy in Germany. </Come in large numbers, be loud and show your flag! In keeping with the occasion, we will do without music and dance this time - but we are and remain colourful, because: FRANKFURT IS COLOURFUL!"</p>